"We are pleased to have ended fiscal 2017 with a record fourth quarter, including market-leading revenue growth and the highest number of new customer additions recorded in a single quarter by the company. For the fiscal year, revenue was $1.8 billion, up 28 percent year over year; our customer base grew to more than 42,500; and we delivered the largest product and features launch in our history," said Mark McLaughlin, chief executive officer of Palo Alto Networks. "Also, Steffan Tomlinson, our chief financial officer, has informed me of his intent to retire from his position. I would like to thank Steffan for his contributions to Palo Alto Networks and his leadership role in guiding the company through a period of tremendous growth and market share gains. We are initiating a search for his replacement, and Steffan will remain in his current position until the search is completed."

Steffan Tomlinson, chief financial officer of Palo Alto Networks, commented, "During the quarter, we added approximately 3,000 new customers and reported record revenue of $509 million, an increase of 27 percent year over year. We also delivered record deferred revenue and billings, while generating cash flow from operations of $240 million and free cash flow of $190 million, ending the fiscal year with approximately $2.2 billion in cash, cash equivalents and investments."

For the fiscal first quarter 2018, we expect:

Palo Alto Networks will host a conference call for analysts and investors to discuss its fiscal fourth quarter and fiscal year 2017 results and outlook for its fiscal first quarter and full fiscal year 2018 today at 4:30 p.m. Eastern time/1:30 p.m. Pacific time. Open to the public, investors may access the call by dialing 1-888-293-6979 or 1-719-325-4879 and using conference ID 8255664. A live audio webcast of the conference call, along with supplemental financial information, will also be accessible from the "Investors" section of our website at investors.paloaltonetworks.com. Following the webcast, an archived version will be available on our website for one year. A telephonic replay of the call will be available three hours after the call, will run for ten days, and may be accessed by dialing 1-888-203-1112 or 1-719-457-0820 and entering the passcode 8255664.

This press release contains forward-looking statements that involve risks and uncertainties, including statements regarding our future financial and operating performance, including our financial outlook for the fiscal first quarter and full fiscal year 2018, our expectations regarding the benefits and timing of new subscription offerings, upcoming organizational changes, including the company's transition to a new chief financial officer, and our expectation to recognize a cease-use loss in the first quarter of fiscal 2018 related to our previous headquarter facilities. There are a significant number of factors that could cause actual results to differ materially from statements made in this press release, including: our limited operating history; our ability to identify and effectively implement the necessary changes to address execution challenges; risks associated with managing our rapid growth; organizational changes, including with regard to identifying a successor to our chief financial officer and the timing of these changes; the risks associated with new products and subscription and support offerings, including the discovery of software bugs; our ability to attract and retain new customers; delays in the development or release of new subscription offerings, or the failure to timely develop and achieve market acceptance of new products and subscriptions as well as existing products and subscription and support offerings; rapidly evolving technological developments in the market for network security products and subscription and support offerings; changes in the timing or the amount of estimated cash flow used to calculate the cease-use loss; length of sales cycles; and general market, political, economic and business conditions.

Additional risks and uncertainties that could affect our financial results are included under the captions "Risk Factors" and "Management's Discussion and Analysis of Financial Condition and Results of Operations" in our Quarterly Report on Form 10-Q filed with the SEC on June 1, 2017, which is available on our website at investors.paloaltonetworks.com and on the SEC's website at www.sec.gov. Additional information will also be set forth in other filings that we make with the SEC from time to time. All forward-looking statements in this press release are based on information available to us as of the date hereof, and we do not assume any obligation to update the forward-looking statements provided to reflect events that occur or circumstances that exist after the date on which they were made.

Billings. Palo Alto Networks defines billings as total revenue plus the change in total deferred revenue, net of acquired deferred revenue, during the period. The company considers billings to be a key metric used by management to manage the company's business given the company's hybrid-SaaS revenue model, and believes billings provides investors with an important indicator of the health and visibility of the company's business because it includes subscription and support revenue, which is recognized ratably over the contractual service period, and product revenue, which is recognized at the time of shipment, provided that all other revenue recognition criteria have been met. The company considers billings to be a useful metric for management and investors, particularly if sales of subscriptions continue to increase and the company experiences strong renewal rates for subscriptions and support.

Free cash flow. Palo Alto Networks defines free cash flow as cash provided by operating activities less purchases of property, equipment, and other assets. The company considers free cash flow to be a profitability and liquidity measure that provides useful information to management and investors about the amount of cash generated by the business after necessary capital expenditures.

"Gartner does not endorse any vendor, product or service depicted in its research publications, and does not advise technology users to select only those vendors with the highest ratings or other designation. Gartner research publications consist of the opinions of Gartner's research organization and should not be construed as statements of fact. Gartner disclaims all warranties, expressed or implied, with respect to this research, including any warranties of merchantability or fitness for a particular purpose." 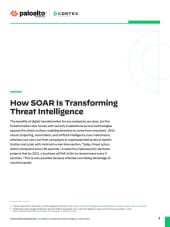