Here in the states, the excitement around the 2012 Olympics is building rapidly as we watch the U.S.  Olympic team trials for track and field, swimming and gymnastics. The competition is an amazing teaser to what is coming in late July. Unbeknownst to many, NBC has established an agreement with YouTube to stream the Olympics in their entirety – amounting to approximately 3,000 hours of online content. If the current volume of streaming media and photo application usage is any indication, where’s my bandwidth? may be asked regularly by network and security administrators beginning July 27th.

In the latest Application Usage and Risk Report (9th Edition, June 2012), streaming video and photo application bandwidth consumption rose 300% to 13.3% when compared to the December 2011 figures. Out of the 107 different applications found within this subcategory, YouTube, PPStream, Netflix Streaming and HTTP Video were the largest consumers of bandwidth. Interactively browse the full list of streaming applications here.

And with the Olympics coming in July, the volume of YouTube traffic will undoubtedly increase, placing added pressure on quality-of-service for business applications. Network and security administrators will be challenged to deploy secure application enablement policies that allow the use of YouTube for marketing, training and other business purposes while limiting the personal use of YouTube or other streaming media applications.

Other key findings outlined in the report include: 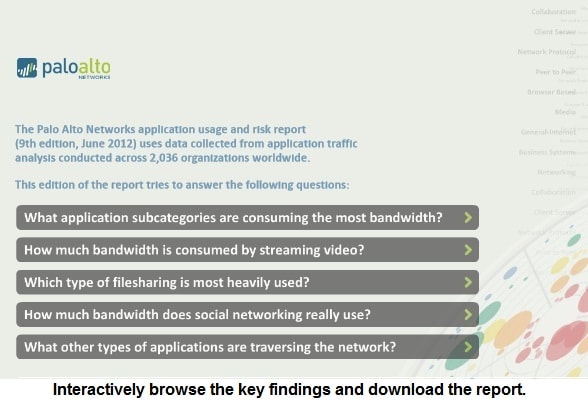 Taken collectively, and viewed in terms of the bandwidth budget, these findings are startling. Filesharing in total is nearly 17%, streaming video is 13% and if you assume that a small percentage, say 10% of the video and filesharing traffic is indeed business related, then that means $0.20 of every bandwidth budget dollar is being used for non-work related purposes. Seems like an excellent reason to consider secure application enablement policies to regain control over the network.