Are Cyberlockers Making Money on Your Network?

A new report by the Digital Citizens Alliance uses the payment structure (fees and credit card processing) of the top 30 cyberlockers to show how they profit illicitly from direct download or streaming of copyrighted materials. Cyberlockers are part of the browser-based filesharing categorization within our taxonomy and we find many of them on the networks we analyze. In short, these cyberlockers put both your company and your users at risk. 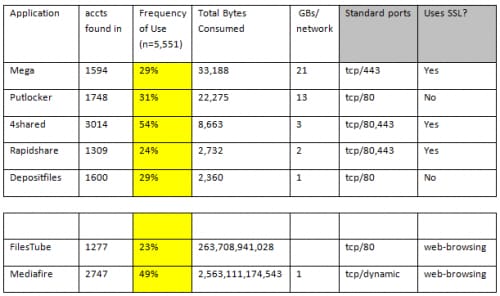 In previous blog posts I have made the assertion that browser-based filesharing applications would supplant P2P for accessing copyrighted files because they are easier to use and they use port 80 or port 443, making them harder detect. P2P still consumes more bandwidth than any other set of applications, but cyberlockers are gaining in popularity and represent security and business.

According to the copyright alert guidelines, users of P2P services are given a series of six warnings before to prove they are not in violation of the law. If a user is on your network, you will be responsible for finding that user and providing the necessary information to address the allegation. Responding to copyright infringement allegations takes time, costs money and if left unchecked may result in damage to your reputation.

Protecting Your Users and Your Company From Copyright Infringement

With our Next-Generation Firewall, users can exert enablement policies for filesharing/file transfer applications using security best practices and a variety of standard features.

Understand the use case for so many variants. There are few if any business reasons for 23 variantts of a single type of application to reside on any one given network. Once you know the applications in use, there will be some – like Putlocker, or Mega – that you may summarily block. Others, like Dropbox or Box.net, or Hightail are more business oriented and warrant added conversation with the user community.  The key here is to work with the business groups in order to find out why the applications are in use –what do they need it for. Once more data is collected, build a case to securely enable it or get rid of it.

Continually monitor and update the policy. The application landscape continually changes as do user requirements, so it is important to monitor the applications and maintain a regular dialog with the user groups.