Last week Palo Alto Networks had the honor of meeting with an international delegation of defense and intelligence officials at the Pentagon’s Silicon Valley innovation outpost: Defense Innovation Unit Experimental (known as DIUx) at Moffett Field. This delegation consisted of 31 CIOs, IT and security leaders from across the U.S. Defense Department, and included 13 foreign officials from NATO, the United Kingdom, Canada, New Zealand, Germany and Japan. This meeting was part of the delegation’s annual industry engagement trip to Silicon Valley and other West Coast centers of technology innovation. Up front, I applaud Dr. John Zangardi, acting Department of Defense Chief Information Officer, for leading this delegation and conducting essential outreach to industry regarding the future of innovation across technology sectors of significant interest to our national security, and that of allies and close partners.

Our CEO, Mark McLaughlin, led the discussion with our President Mark Anderson; Lee Klarich, executive vice president for product management; Nick Urick, president of our public sector LLC (a U.S.-only federal subsidiary); David Colberg, senior director for government affairs; and myself. Mark provided an overview of his role as a member of the National Security Telecommunications Advisory Committee and other areas where Palo Alto Networks provides our industry perspective and counsel to the federal government, including our participation in the IT Sector Coordinating Council’s Executive Committee, Department of Homeland Security’s Cybersecurity Information Sharing and Collaboration and Automated Indicator Sharing programs, Defense Department’s Defense Cybersecurity Information Sharing Environment, and NATO’s Malware Information Sharing Platform. Mark explained how Palo Alto Networks regularly shares operational cyberthreat information with the DoD and its cybersecurity organizations in order to enable them to further strengthen protections across defense critical infrastructure. As a company, we firmly believe that this public and private sector exchange of information sharing plays a key role in preventing and stopping successful cyberattacks.

We also discussed our ideas about how the U.S. government, its allies and its close partners can take a significant leadership position that will change the paradigm of security over the next decade. This included a discussion on several important evolutions in security impacting not only the definition of cybersecurity but also how the entire cybersecurity consumption model will be disrupted in the near future. There are several current and emerging technological developments making this possible, including secure movement to the cloud, automated orchestration of security capabilities, innovation in network design, machine learning, and quantum computing.

As a company, Palo Alto Networks believes that private industry has both the technical ability and responsibility as security innovation leaders to collaborate with the DoD, other critical operational U.S. government agencies involved in cybersecurity, and those of the United States’ allies and close partners on their important cybersecurity missions. 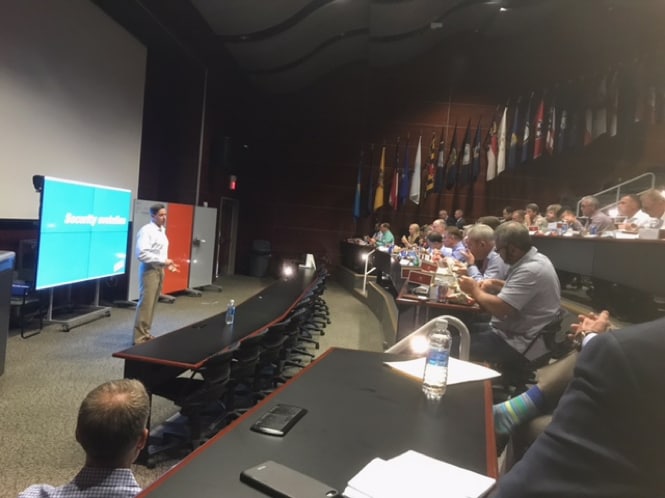