SINGAPORE – Oct. 24, 2019 – Palo Alto Networks (NYSE: PANW), the global cybersecurity leader, today released a report that uncovers the truth about the state of cloud security among large enterprises across Asia-Pacific, including many cases where perception doesn’t match the reality of professionals who know best.

Conducted by Ovum Research, the report shows that large enterprises, defined as those with more than 200 employees, are not prepared for cloud-related cybersecurity threats, and more importantly, make the assumption that public clouds are by default secure. In fact, 70 percent of security decision-makers in large enterprises believe that security provided by cloud providers is sufficient to protect them from cloud-based threats.

“Organisations need to recognise that cloud security is a shared responsibility,” said Elaine Liew, regional vice president for cloud security, Asia-Pacific at Palo Alto Networks. “While cloud providers are responsible for the security of their infrastructure, the onus is on companies themselves to secure their data and applications stored in that infrastructure.”

Large Organisations Have Many Security Tools, but Lack a Unified View of Security

Among the companies surveyed, three out of five (59%) operate with more than 10 security tools within their infrastructure to secure their cloud. However, having numerous security tools creates a fragmented security posture, adding further complexity to managing security in the cloud, especially if the companies are operating in a multi-cloud environment.

The multi-cloud approach creates a dangerous lack of visibility that is prevalent in 64 percent of large organisations surveyed, according to Andrew Milroy, head of advisory services, Asia-Pacific, Ovum.

“The ubiquity of multi-cloud deployments in large organisations calls for a unified view of all cloud-native services. It is ideal for organisations to have a central console that uses technologies such as artificial intelligence to help prevent known and unknown malware threats, and quickly remediate accidental data exposure when it arises,” said Milroy.

The need for automation is further underscored by the study, which revealed that large enterprises do not have enough time and resources to dedicate to cloud security audits and training.

Despite organisations’ inability to provide more frequent audits and security training for IT teams and employees, it is encouraging to see that almost half (49%) of the organisations surveyed use threat intelligence and analytics to identify new threats and take necessary action. Some 19 percent of the organisations have also equipped themselves with real-time threat monitoring capabilities.

In order to be truly secure in cloud environments, it is pertinent for organisations in Asia-Pacific to be cognisant of cloud security best practices, which include:

The survey was conducted amongst 500 respondents from various vertical industries of large businesses with over 200 employees across five countries in Asia-Pacific. There were 100 respondents per country in Australia, China, Hong Kong, India and Singapore.

The companies surveyed needed to have 200+ employees and all had to be using public cloud as a minimum. The respondents to the survey ranged from owners to business directors and C-level executives, all of whom had to be either the final decision-maker or influencer when it came to the organisations’ cloud strategy.

Palo Alto Networks, the global cybersecurity leader, is shaping the cloud-centric future with technology that is transforming the way people and organizations operate. Our mission is to be the cybersecurity partner of choice, protecting our digital way of life. We help address the world's greatest security challenges with continuous innovation that seizes the latest breakthroughs in artificial intelligence, analytics, automation, and orchestration. By delivering an integrated platform and empowering a growing ecosystem of partners, we are at the forefront of protecting tens of thousands of organizations across clouds, networks, and mobile devices. Our vision is a world where each day is safer and more secure than the one before. For more information, visit www.paloaltonetworks.com. 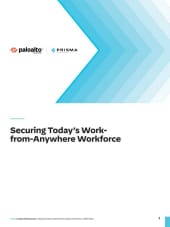