The Aldenham Foundation is an education provider in the south of England. It includes two prep schools, two nurseries, and one senior school, providing education for 5- to 18-year-olds in a rural setting near London. The original school dates back to 1597.

Today, the schools are thoroughly modern. Aldenham has a well-established mobile learning program, with staff and students working from school-issued mobile devices. Old- er students can bring their own devices, and Office 365® is standard. There is an extensive project underway to provide connectivity throughout the 120-acre site.

“We are conscious of our role in providing a safe and secure environment for students—and that applies as much to the physical environment as the digital,” says Charlie Cochrane, Head of Technology for the Aldenham Foundation.

Cochrane wanted to upgrade the schools’ security position by adopting a Zero Trust approach. “We’re on a journey to the cloud—we expect the majority of our servers and ser- vices to be within Microsoft Azure by the end of 2019, along with some services in AWS. It’s important our security makes this journey as seamless as possible.”

“We wanted a platform that was part of an ecosystem,” ex- plains Cochrane. “We’d seen a demonstration of Cortex XDR, and were very impressed with the ability to drill down. It de- livers full, global administrative rights, and the interaction with other products—Palo Alto Networks and others—was excellent.”

All of Aldenham’s 1,000 endpoints have been equipped with Cortex XDR and upgraded to Windows® 10. With Cortex XDR in place, the previous antivirus software has been removed. “Our previous antivirus software was never the easiest to use,” Cochrane admits. “We now have an enterprise-grade approach. The application management, rather than focus- ing on ports, was a big factor for us.”

Benefits of an Integrated Approach to Security

Users are already feeling the benefit, according to Cochrane. “It’s lightweight with no impact on device speeds, and we’ve already picked up on a number of low-level threats. It’s re- assuring to see Palo Alto Networks picking those things up and stopping them in their tracks. I sleep easier at night.”

“There is a growing awareness of cybersecurity among par- ents and governors. The engagement with Palo Alto Net- works, and the security provider’s global reputation, rein- forces the message that the Aldenham Foundation is taking the subject seriously.”

“We’ve seen incidents of other schools being hit by ran- somware attacks around their exam papers. That is a threat we’ve now covered. We have something that is doing the job we need it to do.”

The upgrade was designed and installed by KHIPU Networks Limited, a Palo Alto Networks Diamond partner. KHIPU Net- works is a leading provider of Next-Generation Networking and Cyber Security Solutions across all market sectors. Palo Alto Networks has a strong history with KHIPU, working on numerous projects leading to KHIPU being awarded many Palo Alto Networks accreditations, such as being an Accred- ited Service Centre since 2012. KHIPU is a long-term supplier of the Aldenham Foundation. “We feel like we have a direct line into Palo Alto Networks,” says Cochrane. “KHIPU take a very proactive approach to support.”

Cochrane continues: “Palo Alto Networks Next-Generation Firewalls will be migrated to the cloud, which will provide further flexibility as the Aldenham Foundation manages multiple sites. The bigger picture is that we want to integrate other security tools yet make things simpler to manage. Any time I can save on managing security can be directed at sup- porting end users.”

“Palo Alto Networks products are doing real, tangible things for us, but it is the way that they’re tied together that de- livers the real benefit. By having our systems talking to one another, the likelihood of us being hit by something nasty is greatly reduced.” 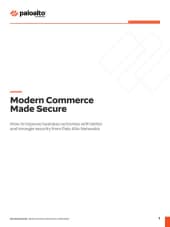