You know those mischievous bunnies in the movie "Peter Rabbit"? How about the heroic minifigs in "The LEGO Movie" or the fighting owls in "Legend of the Guardians: The Owls of Ga'Hoole"? Maybe the prancing penguins in "Happy Feet" had you dancing. Or, perhaps, "Alien: Covenant," "Guardians of the Galaxy Vol. 2" or "The Great Wall" had you on the edge of your seat. If you've been amazed by the breathtaking visuals, compelling characters or memorable performances in any of these films, you can thank the creative wizardry of Animal Logic.

For more than 25 years, Animal Logic has been recognized as one of the world's leading independent creative digital studios, producing award-winning design, visual effects and animation. This prolific creative enterprise has teams in Sydney, Los Angeles and Vancouver, with a workforce that fluctuates between 200 and 600 depending on the number and size of projects in the works. It's critical to the creative process that teams in all three locations, as well as independent partners, are able to securely share digital media files that represent the company's intellectual property and are critical to its reputation and revenue.

Each file can be 30MB or more – twice that if the project is in 3D. With hundreds of these files traversing its network every day, Animal Logic's previous firewalls struggled to handle the volume.

The rise of cloud services and SaaS applications, such as Box, Microsoft® Office 365® and Greenhouse®, across Animal Logic further complicated the situation. The company's legacy firewalls lacked visibility into network traffic, so IT didn't know what was entering or exiting the company's network. Many online services use ciphers that change frequently, making it even more difficult to inspect encrypted traffic.

Eugene Purugganan, systems engineer at Animal Logic, elaborates, "A lot more of our people are using SaaS applications running on public cloud services, like Amazon AWS and Microsoft Azure. We have to make sure we're providing access to those online services while also controlling what they can upload or download to protect our intellectual property."

To address these issues while securely enabling the applications and workflows creators need to be successful, Animal Logic replaced its previous firewalls with Palo Alto Networks® Next-Generation Security Platform. As Animal Logic's security requirements continued to grow, the company upgraded the platform from its original configuration to include PA-5250 next-generation firewalls in a high availability configuration for its Sydney operation and deployed PA-5020s in both of its North American facilities. Animal Logic also takes advantage of Threat Prevention, App-ID™ and User ID™ technology, URL Filtering, and WildFire® cloud-based threat analysis service from Palo Alto Networks.

"We continue working with Palo Alto Networks because, quite simply, it's a platform we can rely on," says Purugganan. "Palo Alto Networks provides the range of security capabilities we need on a single platform, so we don't have to manage separate solutions. The company has a forward-thinking approach, and its innovative product features are very important to us because we need to protect our business from cyberthreats that are constantly evolving."

Like nearly everyone, Purugganan is most concerned about ransomware, such as Petya and WannaCry, as well as zero-day attacks, against which traditional security measures are useless. "We want to protect ourselves from known and unknown threats," he asserts. "Threat Prevention is key, and WildFire has also been very beneficial. We can see the files being downloaded or coming in on the network, and with the WildFire service, they're all inspected proactively. Anything that's unknown to us is usually already known by WildFire, and if it's malicious, the content gets blocked. Then, we get those updates within five minutes, so our environment is always current."

With the Palo Alto Networks platform, Animal Logic also has the granular control essential for its designers and animators to access network assets and cloud services – including Box, Office 365, Dropbox®, ShareFile® and Google® Cloud Storage – without exposing the company to undue risk. The combination of URL Filtering, SSL inspection, App-ID and User-ID let the company allow or deny access as well as specify privileges for uploading, downloading, editing online or basic viewing.

Purugganan explains, "By providing access at a more granular level, we help the company be more productive. We don't have to worry that something might be uploaded to a cloud service when it should not be, or that malicious content gets downloaded that could disrupt our work." He points out that SSL inspection plays a key role in this protection. "The Palo Alto Networks platform makes SSL decryption and inspection much easier. Some of the online services use ciphers that are so strong we couldn't inspect them before, so we had to deny access. Now, we can inspect the newer ciphers and open up those online services to our staff who need access."

Better control also means less unnecessary use of bandwidth, freeing up more room for legitimate traffic. Combined with the Palo Alto Networks platform's high performance, this allows creative teams to easily and efficiently share large files, with full inspection, through Palo Alto Networks next-generation firewalls. "The Palo Alto Networks platform provides the next-generation security features we need at the speeds we need," notes Purugganan. "We're able to use more bandwidth and not worry about the firewalls slowing down throughput. Our teams can be more productive and our data more secure."

Consolidating on the Palo Alto Networks platform also benefits Animal Logic financially. Instead of purchasing and maintaining multiple point solutions, the company only has one integrated platform to manage. What's more, the platform's performance and capacity mean it doesn't need to be upgraded as often as traditional security. Purugganan remarks, "We've looked at other vendors, and their performance combined with the pace that things are changing across our network would have required us to upgrade them twice in the same timeframe compared to the Palo Alto Networks platform. That means substantial savings to us over the long term."

He concludes, "Animal Logic has unique security needs as a creative organization. Protecting our intellectual property is essential, but we also have to provide an open network for our artists. The Palo Alto Networks platform gives us the protection we need without inhibiting the creative process." 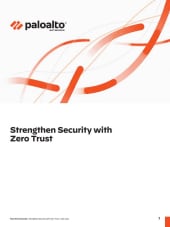 Read this use case to discover how government agencies seek to limit the damage, withstand the impact, and decrease the effect of cyber attacks by pursuing a Zero Trust Architecture.