Support demanding tactical environments in an overhauled tactical network requiring thousands of next-generation security appliances in numerous vehicle types, as well as tents and other installations ready for rapid deployment, with threat prevention to withstand the most targeted nation-state attacks.

Palo Alto Networks Supports the Needs of the Modern Military

The modern military is capitalizing on real-time connectivity and resilience available through technology advancements in their tactical deployments. Superiority on the battlefield means today’s and future soldiers must be equipped with the integration of the most cutting-edge technology — for command, control, communications and intelligence.

For communicating effectively in tenuous circumstances and terrains, tactical communications must be resilient — and in modern times, that means resilience to cyberattacks from sophisticated nation-states that regularly target the military.

The communications must get to mobile outposts, and airborne and seaborne military troops as they did in the past, but with reduced equipment for flexibility and agility. They must also be mobile — on the move (OTM) — so that military units can remain agile and swift, while still in touch — and their cybersecurity must do the same.

• Auto-correlation and reprogramming for swifter prevention of advanced threats in the field.

• Red team experience, proving the above with TTPs of nation- states likely to target militaries today.

• Virtualization of the aforementioned strong capabilities.

• Best-in-industry APIs — swift deployments mean tying in other capabilities to configure and deploy with ease.

• Firsthand experience with the platform usability and threat prevention through nations’ participation in Cyber Range exercises as part of broader multi-nation and single-nation military exercises.

In a thousands-wide deployment of Palo Alto Networks VM- Series in a tactical environment, the military service was re-evaluating their tactical network for today’s modern requirements: fewer equipment, virtualized network functions for power and space savings, and swift on-the-move mobility for their soldiers, with resilience to advanced nation-states regularly targeting the mission network and resources. To meet these requirements, they needed a highly reliable, virtualized security platform that could be deployed across the hundreds of military vehicles and installations throughout the network.

Palo Alto Networks VM-Series Next-Generation Security Platform now secures all communications for mission-command applications across echelons, commander to troops, network-equipped tank to aircraft for this military customer. Thousands of VM-Series devices are spread across tanks and other vehicles, often with hundreds of miles between them, linked point to point only by satellite or other line-of-sight communications.

For hundreds of platforms deployed in vehicles and local command posts, the network uses the Next-Generation Firewall for blocking, with Threat Prevention for real-time sensor updates to newly discovered threats on all of the virtual firewalls across all of the deployed units. Those platform-protected nodes, which have internet access, filter their web traffic using the platform’s URL Filtering with the Next-Generation Firewall controls.

This service chose the Next-Generation Security Platform for this massive deployment for several reasons. Beyond the platform’s value of advanced threat prevention that correlates security feeds and automates reprogramming of all network sensors, the military also chose the platform for its many other qualities that are greatly needed for this demanding environment.

Chef to Security Admin: No Problem

• Ease of use – Palo Alto Networks could meet the demanding ease of configuration requirements. In these arduous, swiftly changing environments, today’s chef could be tomorrow’s security administrator. Troops don’t have the luxury of time for training that most of their commercial counterparts enjoy.

• Ability to support thousands of custom apps – Like many defense organizations with thousands of custom applications, there were doubters who didn’t believe this support was possible without tremendous time and effort. The deployment team was pleasantly surprised at the ease of creating, maintaining and deploying their own custom applications. To prove the ease of use in Palo Alto Networks custom application identification technology (App-ID) the account team told the military service to provide their most complex applications to the team for App-ID creation. Working together, the military support teams witnessed firsthand the ease of App-ID development. Based on the customer’s firsthand experience with the ease in App-ID creation, rather than outsource to a consultant or a resident engineer, they chose to do all App-ID creation in-house.

• Orchestration through solid APIs – The deployment team was pleasantly surprised with the high quality APIs that allow them to orchestrate their high-scale deployments. With a push of a button, their VM-Series platform deployments can be off and running.

The military service now has secure readiness and responsiveness to their troops, advanced threat prevention in the field against today’s nation-state adversaries, a seamless deployment of App-ID for their large-scale custom apps, and resilient security in demanding tactical, rapidly mobile environments.

For more information on the many ways we support the civilian, defense and intelligence community needs of governments around the world, visit https://www.paloaltonetworks.com/government. 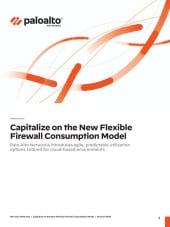