Telkom Indonesia is Indonesia’s largest telecommunications services company, beginning its journey as Digital Telco. Ranked ninth in the Asia-Pacific region in terms of market value, its ambition is to break into the top five. "We’re one level below China Telecom and Singapore Telecom, but we’re seeing double-digit growth and have serious international expansion plans,” said Sihmirmo Adi, vice president of IT Strategy and Governance, Telkom Indonesia.

The business includes connectivity (broadband access), mobile, high-speed internet, pay TV, data centers, and digital services for the retail and enterprise markets. Its corporate vision is to "be the king of digital in the region,” with its mission being to "lead Indonesian digital innovation and globalization.”

From a network perspective, Telkom Indonesia has a complex network infrastructure that enables a large variety of services, and features more than 10,000 users. As such, the company experiences a number of security threats.

"We face many cyberthreats,” said Mirmo. "From simple password brute-force attacks to the denial of services and SQL injections. As such, the impact on the business can be huge. We need to be agile enough to handle commodity threats and clever enough to develop responses to new threats.”

Said Mirmo, "Since 2013, we’ve spent more than US$1 million (trillions of Rupiah) upgrading our IT, including a new security operations center. We see Palo Alto Networks as the number one provider of security solutions. It has enabled us to take our security operations to a higher level. I now have complete visibility of threats, the team has become more skilled, and we’re better able to focus on the development of new services.”

He says greater visibility and ability translates to 30 percent annual savings in security costs: "Threat detection is more effective, while we are also spending less time managing our network. The usability of the Panorama user interface and policy management has allowed us to navigate and manage configuration effectively and efficiently.”

In terms of what Palo Alto Networks can save the company, Mirmo was also impressed. "We expect a 30 percent reduction in annual security costs in terms of operational, staff and IT expenses,” he said. In addition, by not having to upgrade or replace existing devices, Mirmo expects to see further considerable savings in the future. "We think that we might save billions of rupiahs in relation to capital expenditure due to not having to invest in upgrades or replacements,H he said. 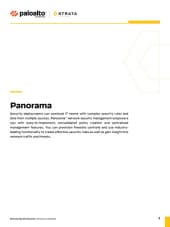 Security deployments are complex and can overload IT teams with complex security rules and mountains of data from multiple sources. Panorama™ network security management empowers you with easy-to-implement, consolidated policy creation and centralized management features. Set up and control firewalls centrally with industry-leading functionality and an efficient rule base, and gain insight into network-wide traffic and threats. 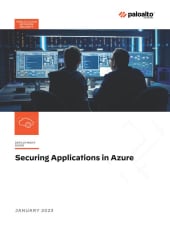 This reference document provides detailed guidance on the requirements and functionality of the Transit VNet design model and explains how to successfully implement that design model using Panorama and Palo Alto Networks® VM-Series firewalls on Microsoft Azure.