Variations on a Theme

In the music world, variations on a theme is loosely defined as, “material repeated but in an altered form.” This is an apt description of the regional findings from the latest Application Usage and Threat Report published a few weeks ago. There are regional differences when compared to the global dataset, but they are very subtle, a fact that can be partially attributed to the size of the sample. The data encompasses more than 3,000 networks (regional breakdown shown in the graphic below) where we analyzed 1,395 applications consuming 12.6 petabytes of bandwidth and more than 5,000 unique threats generating 260 million associated logs. 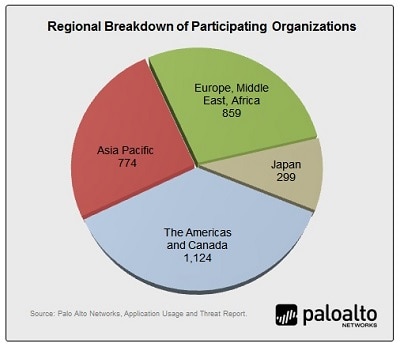 The Application Usage and Threat Report is the first analysis of its kind to map threat activity to applications and the findings cast doubt on common perceptions that sharing applications represent all of the risks; it confirms what most security practitioners already knew – their business applications being targeted; and it sheds light on the most common mechanism used by malware to evade detection – hiding in plain sight.