In this post we discuss CVE-2014-7911 and the various techniques that can be used to achieve privilege escalation. We also examine how some of these techniques can be blocked using several security mechanisms.

CVE-2014-7911 was presented here along with a very descriptive POC that was written by Jann Horn. Described briefly, the ObjectInputStream doesn't validate that the serialized object's class type, as described in the serialized object, is actually serializable. It creates an instance of the wanted class anyway with the deserialized values of the object. Therefore, one can create object of any class, and control its private variables, by serializing objects from another class, that would be deserialized as data members of the wanted class.

Let's look at the example below:

The following snippet (copied from the original POC) shows a spoofed BinderProxy instance:

android.os.BinderProxy class isn't serializable, and it involves native code that handles mObject and mOrgue as pointers.

If it was serializable, then the pointers valued wouldn't be deserialized, but their dereferenced values would.

The deserialization code in ObjectInputStream deserializes the sent object as an android.os.BinderProxy instance, leading to type confusion.

As mentioned earlier, this type confusion results in the native code reading pointer values from the attacker's spoofed android.os.BinderProxy, supposedly private fields, which the attacker modified.

Specifically, the field of interest is mOrgue.

The android.os.BinderProxy contains a finalize method that will result in native code invocation. This native code uses mOrgue as a pointer.

This is the finalize method:

And this is the declaration of destroy:

Note that at this point, drl is controlled by an attacker, as evident by the line

So decStrong is going to be called with us controlling 'this' pointer.

Note the line refs->mBase->onLastStrongRef(id); These lines will eventually lead to arbitrary code execution.

In the following screenshot of RefBase::decStrong assembly, the attacker controls r0('this pointer') 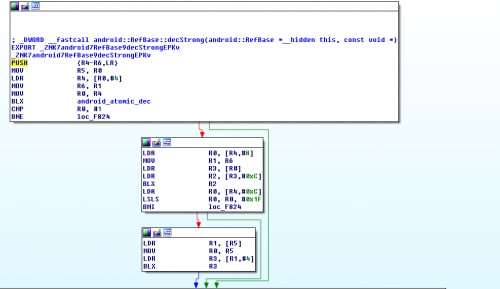 The first use of the controlled register r0, which contains the 'this' pointer (drl) is in these lines:

These lines are translated to the following assembly:

First, r4 is loaded with the mRefs variable.

Note that r0 is the 'this' pointer of the drl, and mRefs is the first private variable following the virtual function table, hence it is 4 bytes after 'this' pointer.

This is translated to:

As one can tell -  the line refs->removeStrongRef(id); is not present in the assembly  simply because the compiler optimized and omitted it, since it has an empty implementation, as one can see from the following code:

Following the call to android_atomic_dec are these lines of code:

These are translated to the following assembly lines:

Note that android_atomic_dec returns the value of the specified memory address before the decrement took place. So in order to invoke refs->mBase->onLastStrongRef(id) (blx r2), we must get refs->mStrong to get the value of 1.

As we can see up to now, an attacker has several constraints that he must adhere to if he wishes to gain code execution:

In addition, an attacker must overcome the usual obstacles of exploitation - ASLR and DEP.

One can employ basic techniques to fulfill these requirements and overcome the mentioned security mechanisms, including heap spraying, stack pivoting and ROP. Let’s look at these in detail.

An attacker's first step will be to get a reliable readable address with arbitrary data - most commonly achieved by a heap spray.

The system server provides several core functionalities for the android device, many of which are exposed to applications via various service interfaces.

A common paradigm to invoke a service in the context of the system server is like the following:

The acquired manager allows us to invoke functionality in the system server on behalf of us, via IPC.

Several services can be used by us for a heap spray, but for the purpose of this blog, we decided to use a heap spray that requires special app permissions, to prevent normal applications from utilizing this technique.

The location manager allows us to register test providers via the function addTestProvider - allowing us to pass an arbitrary name that contains arbitrary data. As we mentioned, one should enable developer options and enable the mock locations option in order to utilize this.

Note that this heap spray does have its limitations – the data is sprayed using the name field, which is Unicode. This imposes a limitation – we are limited to byte sequences which correspond to valid Unicode code points.

After spraying the system server process memory address space, we encountered another issue - our chosen static address indeed pointed to readable data on each run, but not to the exact same offset in the spray chunk each time.

We decided to solve this problem by crafting a special spray that contains decreasing pointer values.

Here is an illustration of the sprayed buffer, followed by an explanation of its structure: 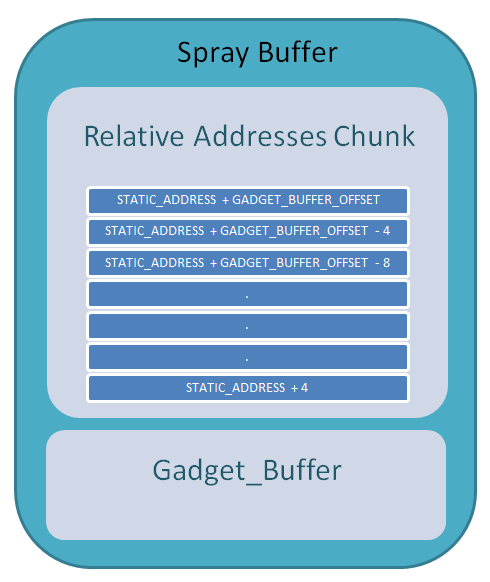 STATIC_ADDRESS is the arbitrarily chosen static pointer in mOrgue.
GADGET_BUFFER_OFFSET is the offset of GADGET_BUFFER from the beginning of the spray.

In each run of system server process, the static address we chose points to our controlled data, but with different offsets.

r0 (which always hold the same chosen STATIC_ADDRESS) can fall to any offset in the "Relative Address Chunk", therefore point to any of the STATIC_ADDRESS + GADGET_BUFFER_OFFSET - 4N addresses, on each time.

In the case that r0 (=STATIC_ADDRESS) points to the beginning of the spray : STATIC_ADDRESS = Beginning_of_spray.

On any other case – r0(=STATIC_ADDRESS) points to an offset inside the spray (the offset is dword aligned):

The higher offset in the chunk that r0(=STATIC_ADDRESS) points to, the more we have to subtract to make the expression:

No matter to which offset in the chunk r0 points to, dereference it would give us the current address of GADGET_BUFFER.

But where do we get if we dereference the other addresses in the chunk?

As farther as we go above r0, the farther the dereference would bring us below GADGET_BUFFER. 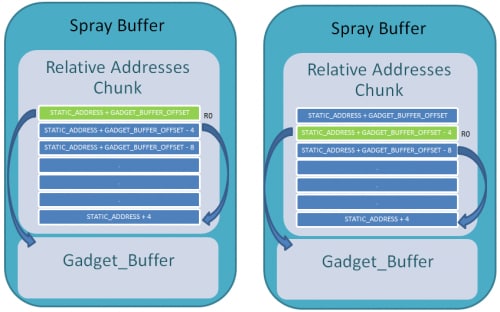 Now that we have a valid working spray, let’s go back to analyzing the assembly.

Now, after atomic_dec return value is indeed 1, we should overcome the other dereferences to get to the blx opcode.

Note in order to succeed with this dereference, [GADGET_BUFFER + 4] should contain a KNOWN valid address.

So now we can build the GADGET_BUFFER as following: 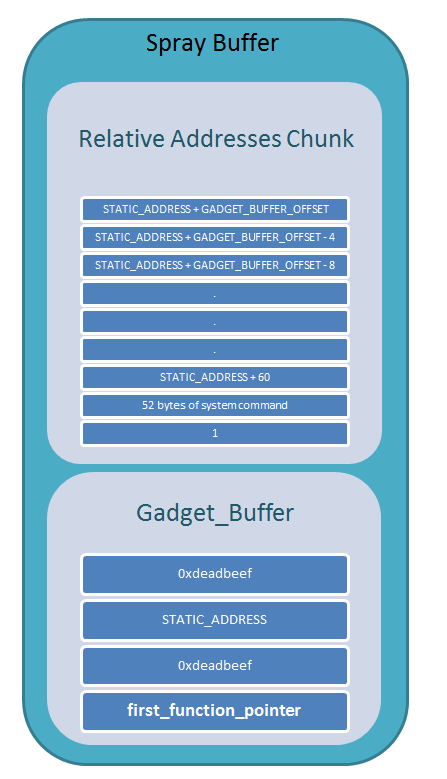 We chose to run the "system" function with a predefined command line.

In order to control the r0 register, and make it point to the command line string, we should use some gadgets that would manipulate the registers.

We got only one function call, so to take control on the execution flow with our gadgets, we should use a stack pivot gadget.

Therefore, the first function pointer is the preparations for the stack pivot gadget:

Where r5 equals to the original r0 (STATIC_ADDRESS) as one can see at the beginning of decStrong.

This gadget does the Stack Pivoting.

SP register points to r7 – therefore the stack is under our control and points to GADGET_BUFFER.

Ret to the next gadget that should be kept 10 dwords from the beginning of GADGET_BUFFER (2 dwords after the current gadget – pop     {r3,pc})

That is the last gadget where we call system!

Here is an updated layout of the memory for this to happen: 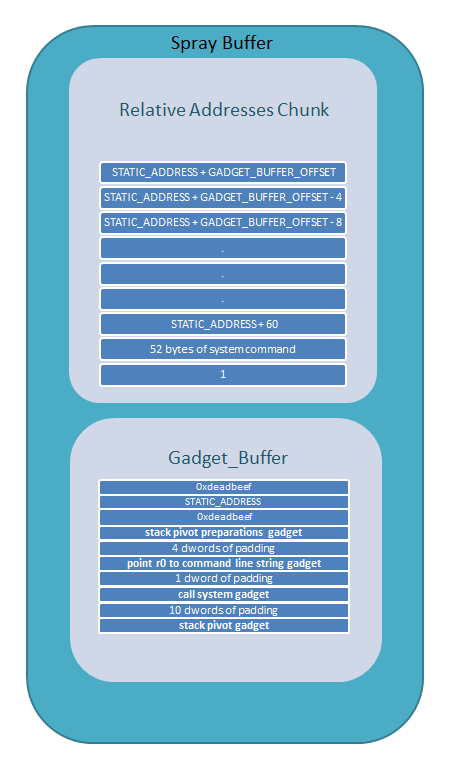 There are two important issues we should keep in mind when choosing the gadgets addresses.

As described before, we use the "system" function to run our command line. The length of the command line is limited, and actually a command line can't be used for every purpose. So we decided to use a pre compiled elf, that being written to the file system, as an asset of our app. This elf can do anything with uid 1000 (the uid of system server). The command line we send as an argument to system is simply –

Android has some common security mechanisms such as ASLR and DEP which should make an exploitation of vulnerability harder to achieve.

Moreover, every application runs in its own process, so the IPC communication could be validated, and making guesses on memory layout shouldn't be intuitive. On the other hand, the fact that every process is forked from the same process makes ASLR irrelevant for vulnerabilities within zygote's sons and the binder connection from every process to system server could lead to heap spray as seen on this post. Those issues appear to be inherent in the Android OS design.

Palo Alto Networks has been researching an Android security solution that based on our lab testing would have blocked this exploit (as well as other exploits) with multiple exploit mitigation modules. We hope to share more details in the coming months.