Welcome back to our blog series where we reveal the solutions to LabyREnth, the Unit 42 Capture the Flag (CTF) challenge. Over the last several weeks, we revealed the solutions for each of the challenge tracks. The time has come for us to share the solutions to our last track, the Random track.

We are given a Java file that we can decompile with ByteCodeViewer. 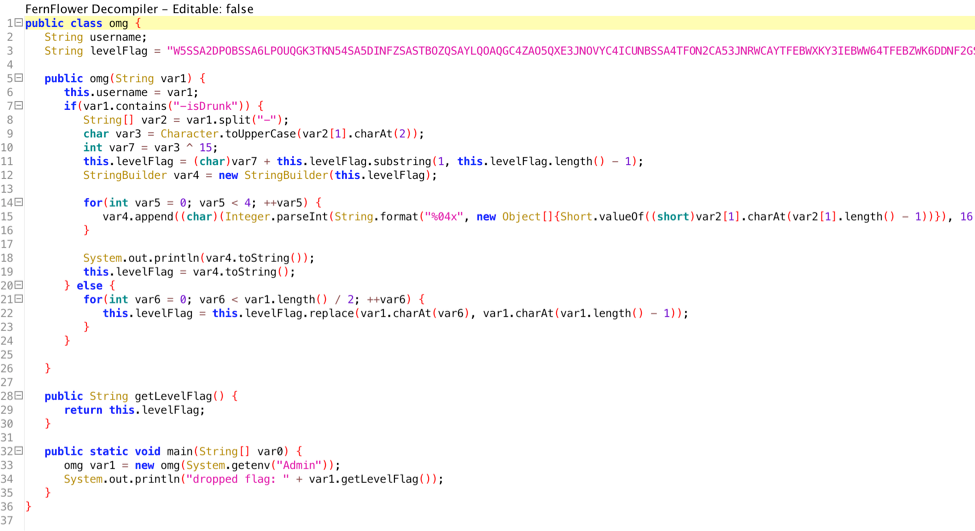 We can see that we need an environment variable Admin and there is an if condition (if –isDrunk) in the contents of the variable. If we run it with that variable, we get the following output.

If we base32 decode the output, we get the flag.

We hope you enjoy this Java app as a warm-up. The rest will be much more exciting! The flag is PAN{D0_Y0u_Ev3n_Base32}

Random 2 Challenge: Can you express yourself regularly?

For this challenge, we’re handed two files: server.py and omglob_what_is_dis_crap.txt. Taking a quick look at server.py, it looks like this is a server running somewhere, accepting connections, checking a regex, and then returning a key if the passed information doesn’t match the regex.

So what’s the regex that it tests against? Well, we see that it reads in the string from omglob_what_is_dis_crap.txt. So let’s take a look at that…

From this regex we can see three different types of conditions:

So, we need to create a string that is 191 characters long, and use the third type of condition to tell what characters each position can be. We can create a python script that parses the regex and gets out all of the appropriate conditions, then creates a string for us that won’t match those conditions. So feast your eyes below on a regex to parse a regex.

When we run this, we get the following output:

We can now test this regex to see if it works with the server and it will give us the key:

Which returns the key to get us to the next level:

Random 3 Challenge: I'm not sure how they got in or what they were after but they left some cookie crumbs.

Opening the provided network trace file with Wireshark and observing the IPv4 conversations, participants found only two systems communicating in the pcap. By observing the TCP tab of the conversations menu, participants could see the pcap file contains many connections from a single source port to almost all destination ports. This is indicative of a port scan.

This hypothesis can be confirmed by looking at the content of the TCP connections; there is none. Each SYN packet (except for 7) is responded to with an RST. The remaining seven connections, which responded with a SYN+ACK, were immediately closed with a RST by the originating side of the connection. This pcap definitely contains a TCP SYN port scan.

From this point, participants were required to hunt around in the pcap for the next step of the challenge. The only thing that changes between SYN packets in the trace file are:

By observing the first SYN packet of the capture file, participants could locate a zip file header (0x504b0304) within the sequence number. I also tweeted a hint for this challenge referencing DoS cookies, a technology used to prevent SYN floods.

Below is a picture of the zip header in the first packet’s sequence number of the trace file. 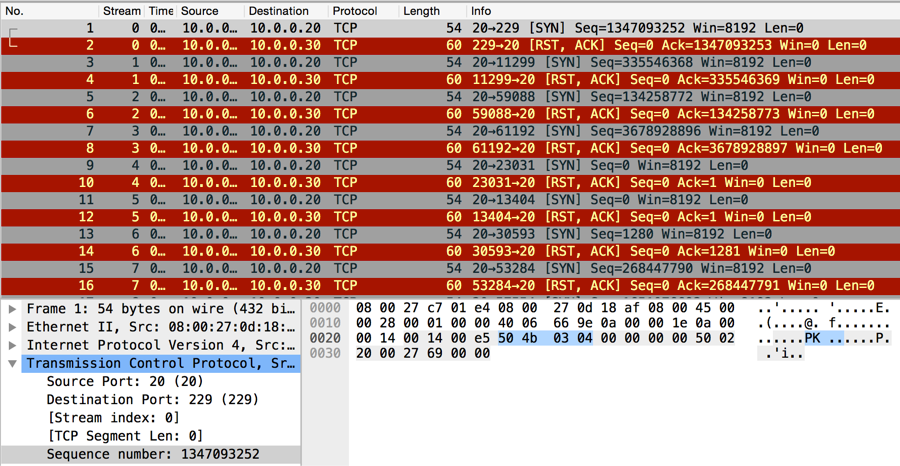 A Python script using dpkt could easily be written to extract and reassemble the zip from the sequence numbers of the SYN packets.

Decoding the base64 blob results in another zip file which contains four images. One of the images contains the flag, PAN{YouDiD4iT.GREATjob}.

Random 4 Challenge: And you thought you hated PHP before you started this challenge

For the fourth challenge in the Random track, users are presented with a PHP script. This particular script weighs in around 1500 lines and presents a user with a text-based maze-like game where they must appropriately choose the correct path to receive the answer. 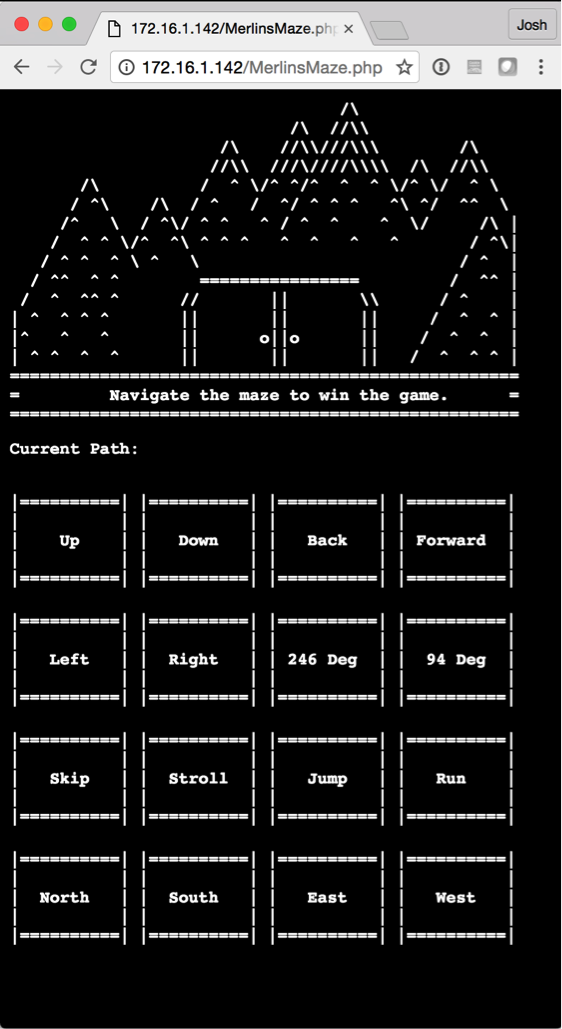 Looking at the underlying code, we see a large blob of obfuscated PHP code, followed by the HTML that generates the data above. The code consists primarily of what looks to be junk code, along with a few lines of unique code scattered within that to actually perform tasks. 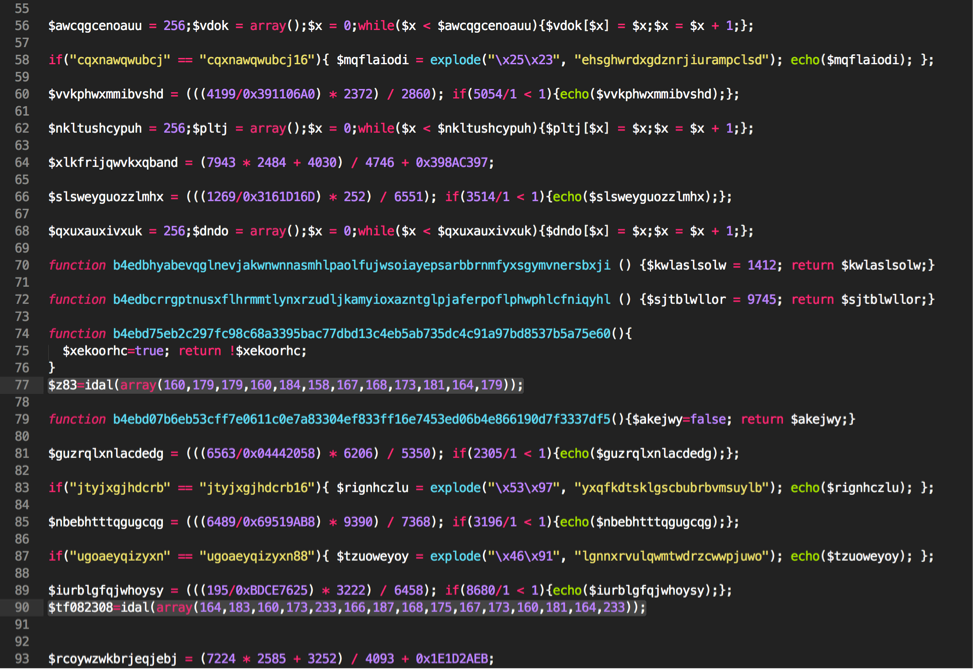 Making a copy of this file and removing this junk code provides us with the following:

After de-obfuscating the code above, we get a better understanding of what is going on. Comments have been added and the code has been better formatted to show what everything is doing.

Using this information, we can decode the provided PHP using the following Python code:

This leaves us with the following decoded PHP code:

At this point we’re able to trace what is happening when we enter various options within the script. Data is written to a ‘.backup.bin’ file to keep track of what data was previously inputted. After stepping through the code and seeing what checks have been included, we determine that the following order must be provided:

Entering this into the program leaves us with the following: 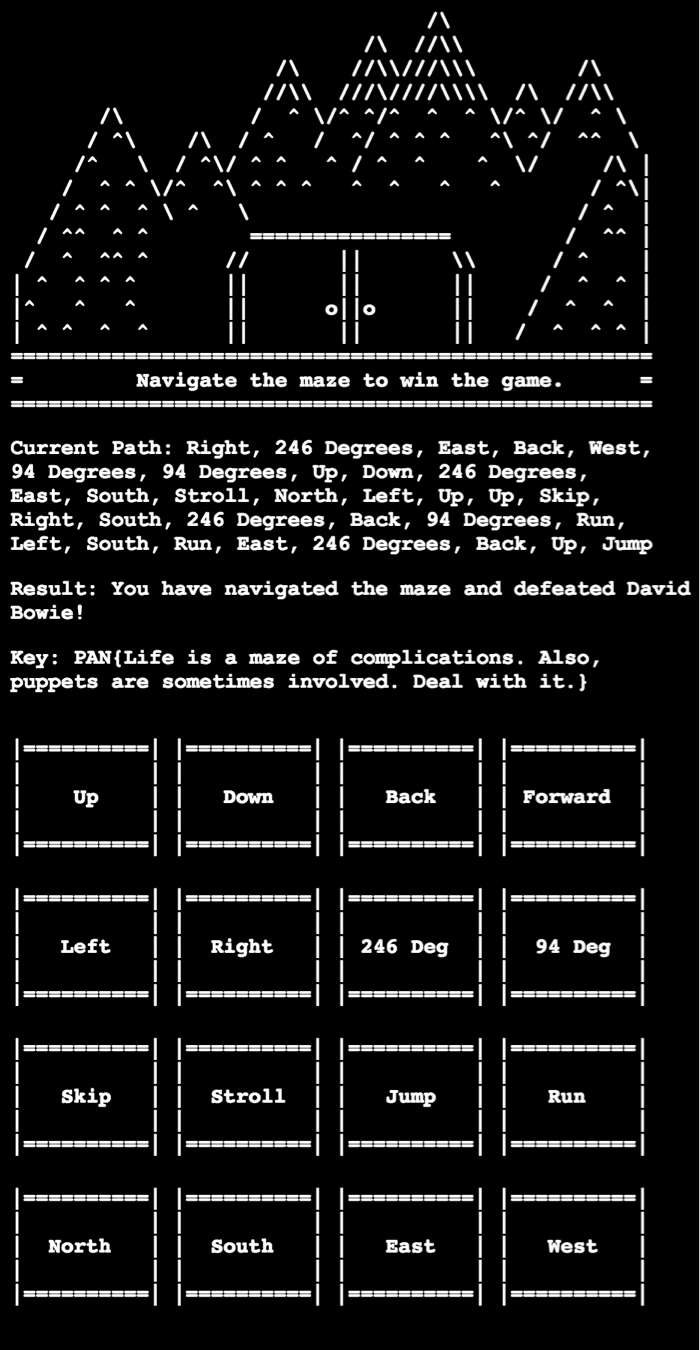 This leaves us with a key of PAN{Life is a maze of complications. Also, puppets are sometimes involved. Deal with it.}

Random 5 Challenge: You might have to be a snake charmer to crack the newest version of APT Maker Pro. What's the worst that could be in ten lines of Python? 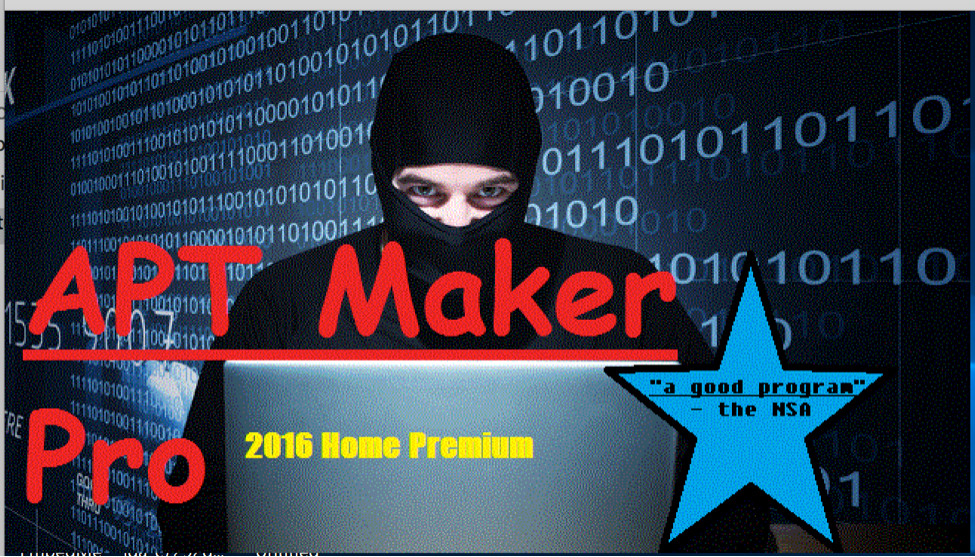 TLOP is the final challenge of the LabyREnth CTF random track. When you download it, you're given a file called TLOP.pyw. If you run it, it will open a program called APT Maker Pro - UNREGISTERED TRIAL VERSION. There's a button labeled "Generate APT" which informs you that you need to activate APT Maker Pro, and a button labeled "Activate APT Maker Pro!" which brings up a dialog asking for the product key. The challenge here is to find the product key to activate the program, allowing you to generate the APT.

Let's start reversing! TLOP.pyw is a pyw file, not a py file, which is pretty much the same except that on Windows pyw, files don't bring up a command line window.  It can be renamed to py if you'd like to print debug info to STDOUT. Once you open up the file, you'll see ten lines of python (get it? Ten Lines of Python? TLOP... it's stupid). Most of the code after the imports simply sets up a TKinter window, which is actually the splash screen. The last line is where it gets interesting:

So it's an exec statement being passed the result of marshal.loads, which is loading some zlib'd data. Marshal is the Python module for serializing and deserializing builtin Python types. If we remove the exec and run the same line in the Python shell, we can see the result is a code object. Exec statements in Python accept two types of input, strings of Python code and code objects which contain compiled Python bytecode. Code objects are most often seen used in .pyc files, which are compiled Python files.   These compiled Python files are generated when Python modules are imported. Pyc files contain a 32-bit magic number specifying the Python version, a 32-bit timestamp of the compilation, and a marshaled code object. Since we already have a marshaled code object, we can turn this into a .pyc file with the following code:

Using uncompyle2 we can decompile the stage1.pyc file we created. 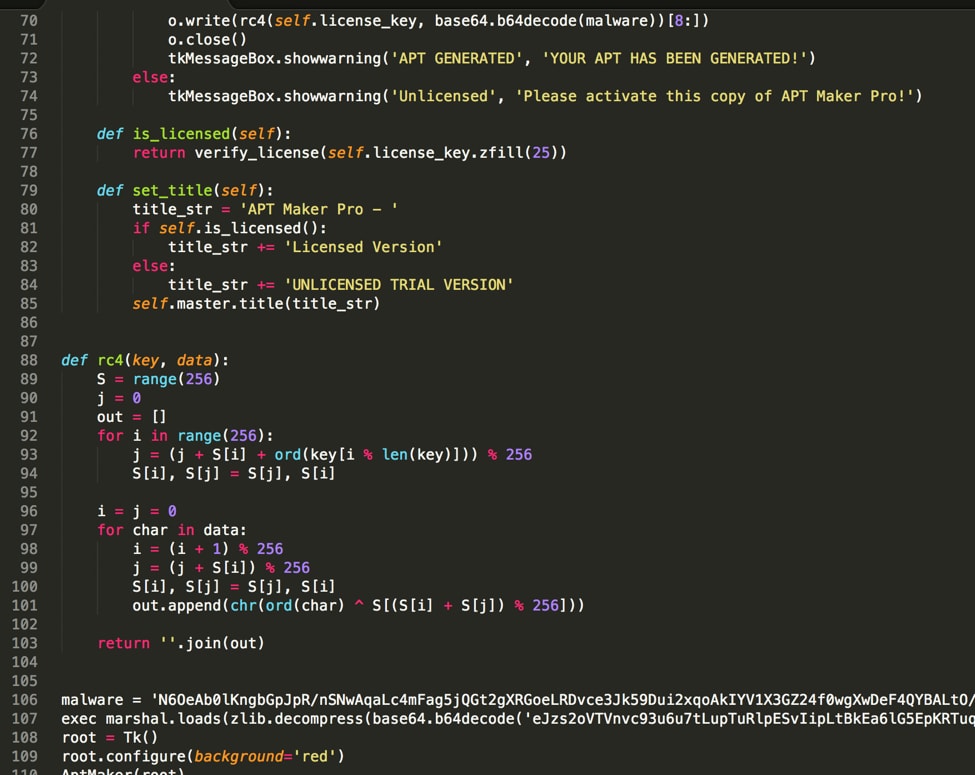 The resulting decompilation contains a class called AptMaker which contains most of the code for the UI. After the class there is a RC4 function, as well as another exec on the result of another marshal. We can build the exec’d object into another pyc file to analyze it.

If we attempt to decompile the stage2.pyc with uncompyle2, we get the following error:

Throwing it at other Python decompilers will likely yield similar errors, so we’re going to have to take a different approach. Since it won’t decompile, we can attempt to disassemble the bytecode. Python has a built-in module for disassembling Python bytecode called dis, which we can use to disassemble the pyc file we produced by running the following code:

The following output is produced from the code above:

The code output is relatively simple. The first instruction, LOAD_CONST 0, pushes the constant at index 0 in the current code object onto the stack. After that we have MAKE_FUNCTION 0, which pops a code object off of the stack and turns it into a function object. The third instruction, STORE_NAME 0, pops the top item on the stack (the function we just created) and stores it with the name at index 0 in the code object.  That name in this case is “verify_license”. What this sequence of instructions does in practice is to create a function named verify_license. We can see the verify_license function is referenced in our previous decompilation inside the “is_licensed” function:

Now that we know that all this code is doing is creating a function, we can actually run it and use the verify_license function from the Python shell by importing the stage2.pyc file. If we run the following code we can start to play around with the function from the shell:

From this we know that verify_license is a function that returns a boolean. If we disassemble the function we will see the following:

First off it’s pushing constant 0, which is a code object, to the stack.

The next thing it does is push constant 1, which is None, to the stack.

DUP_TOP duplicates the top item of the stack, so it pushes another None to the stack.

EXEC_STMT is the equivalent of the “exec” keyword in regular Python. It takes three parameters, a code object or Python string, and two optional parameters containing global and local variables. In this case the code object is the one pushed at the start of the function, and the global and locals are not used, so those are the two Nones on the stack.

This code pushes the value stored for name 0 and returns it. Name 0 here appears to be “ “, which is not a valid Python name and is not referenced anywhere else in the function, so it’s safe to assume this gets set by the code run by the EXEC_STMT.

Since there’s not much code in here, we can assume the meat of the code is inside the code object that gets exec’d. We can disassemble that code object by running the following:

Unlike the previous times we’ve run dis in here, you’ll start seeing incredibly long output that looks something like this: 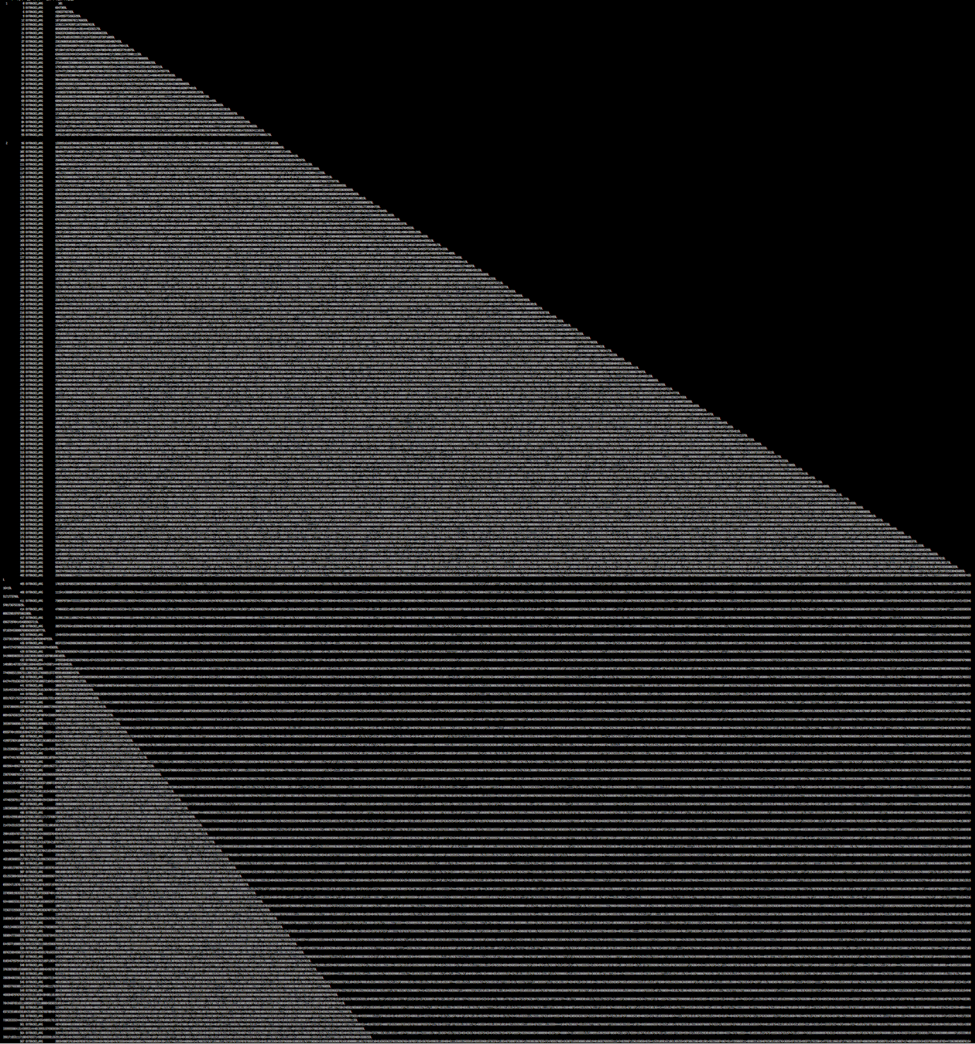 A bird’s eye view of the disassembly

If we actually let the disassembly run until it’s entirely finished we won’t actually get any useful information. The entire output is thousands of EXTENDED_ARG instructions with increasingly large arguments, followed by a JUMP_FORWARD to the same large value.

So what’s the issue? The Python runtime stores the arguments for Python instructions in a signed 32-bit integer called oparg. Python instructions that have arguments are 3 bytes long, 1 byte for the opcode and 2 bytes for the oparg value. The problem with this is that instructions can only set the lower 16-bits of the oparg, instead of the whole 32-bits. To get around this limitation, Python has an instruction called EXTENDED_ARG, which shifts its argument to the left 16-bits, allowing you to set the upper 16-bit in one instruction, and the lower 16 in the next. If you put multiple EXTENDED_ARG instructions in a row, the Python runtime will simply keep shifting the 32-bit integer that is oparg, and bits will fall off the end. However, if you disassemble that code with dis, oparg is stored in a Python number. Since dis uses a Python number instead of a fixed 32-bit integer, the number keeps on growing with every single EXTENDED_ARG instruction.

After coming across this and a few other issues with how dis handles funky bytecode, I wrote my own assembler/disassembler called pyasm, which we can use to produce a slightly more useful disassembly.