Partnering with the Commonwealth of Virginia

Last week’s 25th annual RSA Conference brought together leaders from around the world to discuss the most pressing issues in cybersecurity, and Palo Alto Networks was pleased to participate in these significant discussions, including the important topic of strengthening the partnership between the public and private sectors. The RSA Conference attendee and speaker lists underscored the need to enhance our strong partnerships with the public sector to help secure networks that are being targeted by cybercriminals, terrorists and nation-states. In short, it’s clear that restoring trust in the digital age by preventing successful cyber breaches requires leadership from federal and state officials, as well as the private sector.

During the conference, Mark McLaughlin, our CEO, had the opportunity to meet with several leaders taking action on cybersecurity, including Virginia Governor Terry McAuliffe. Under the leadership of Gov. McAuliffe, the Commonwealth of Virginia is leading by example, and Palo Alto Networks is pleased to be a strong partner. During the meeting, they also discussed the opening of the Palo Alto Networks Threat Intelligence Center of Excellence at our new office in Reston, Virginia, located at the Reston Business Center.

This multimillion-dollar investment is a down payment on our plans to dramatically increase our presence and workforce in the National Capitol Region. The Center of Excellence demonstrates the importance of cybersecurity threat intelligence and information sharing, as well as our focus on expanding cooperation between the U.S. government, state and local officials, and the international public sector to help successfully prevent cyberattacks around the world. 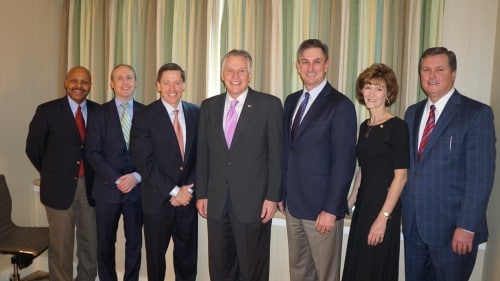 For more information about Palo Alto Networks presence at RSA 2016 and our key takeaways, please visit: