In 2017, global mobile subscriptions reached a total of 7.8 billion. By 2023, there will be more than 30 billion connected devices, including 20 billion IoT devices. Cybercriminals have taken note of this massive growth and turned their malicious activity toward mobile and IoT devices and networks, as well as accelerated their development of Android-based malware. Considering 85 percent of new mobile devices sold worldwide are Android-based, and there are more vulnerabilities in the Android ecosystem than ever, it’s no surprise Android has become a favorable target for malicious actors.

The new Traps app for Android extends malware detection and prevention to Android endpoints. Traps for Android leverages both local analysis and threat intelligence from WildFire to detect and prevent malware from running. The Traps app enforces security policies to determine whether to block known malware and unknown files, as well as perform local analysis to determine the likelihood an unknown file is malware. Administrators have additional controls to allow or block unknown apps before Traps receives an official verdict for the app. 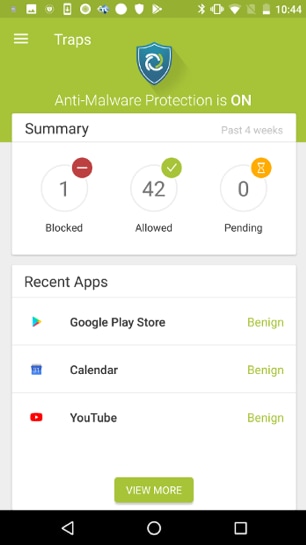 Why is this important?