How to Identify and Remediate the Risks Associated with Ripple20

The expanding number of IoT devices, while enhancing business productivity, has created an increasing amount of access points for attackers to exploit. As organizations continue to adopt IoT technologies, it’s imperative they employ strict security measures to decrease the attack surface and prevent potential threats. This blog post identifies a series of IoT threats organizations may be exposed to and the proper mitigation strategies they can employ to secure IoT devices and protect sensitive data.

Cybersecurity researchers at JSOF recently published a number of zero-day vulnerabilities in the TCP/IP protocol library developed by Treck. This library, which implements a lightweight TCP/IP stack, has been used by multiple vendors as a way of providing internet connectivity across a number of different device types. The collection of threats, given the name Ripple20, constitute 19 vulnerabilities that can allow an attacker to execute code remotely, steal data, change behavior, cause malfunctions, and hide malicious code. Four of these vulnerabilities are of critical severity, with CVSS scores above nine. The attacks can be performed over DNS, ICMP, DHCP, IPv6, and ARP.

Ripple20 is especially significant due to the number of vendors, devices, and verticals that use the aforementioned library. As per the researchers at JSOF, the vulnerabilities have been named this way to signify the ripple effect they will cause in the IoT landscape over the next several years.

The following table lists the severity and fixed version for each Ripple20 CVE (common vulnerability and exposure):

The library is currently used by leading vendors like HP, Cisco, Baxter, B. Braun, Schneider Electric, Intel, and Rockwell Automation, and in multiple industries, such as medical, transportation, industrial control, enterprise, retail, and finance. The types of devices affected from this vulnerability range from everyday office devices like printers and access points to specialized devices like infusion pumps and industrial control devices. Since this library not only is used directly by the equipment vendor but also is integrated into various third-party software suites, tracking the presence of this library and patching it would be a challenge for consumers. Vendors have released advisories about specific devices that have been affected by Ripple20.

The risks that are associated with Ripple20 include:

Customers should ensure their IoT devices do not have any unused ports open, which will limit the entry points available to an attacker. Sensitive devices should maintain proper network segmentation by not being in the same network as guest devices or devices that have ports open from the internet. Proper network segmentation greatly reduces the attack surface and prevents a vulnerable device from spreading the threat to a larger pool of devices. Social distancing applies to devices too!

Palo Alto Networks IoT Security service can help pinpoint devices in your inventory that are vulnerable to the above CVEs. Powered by machine learning, our platform will determine the identity of devices down to the type, profile, and model. Vulnerabilities will be discovered based on these identities and displayed within the platform. 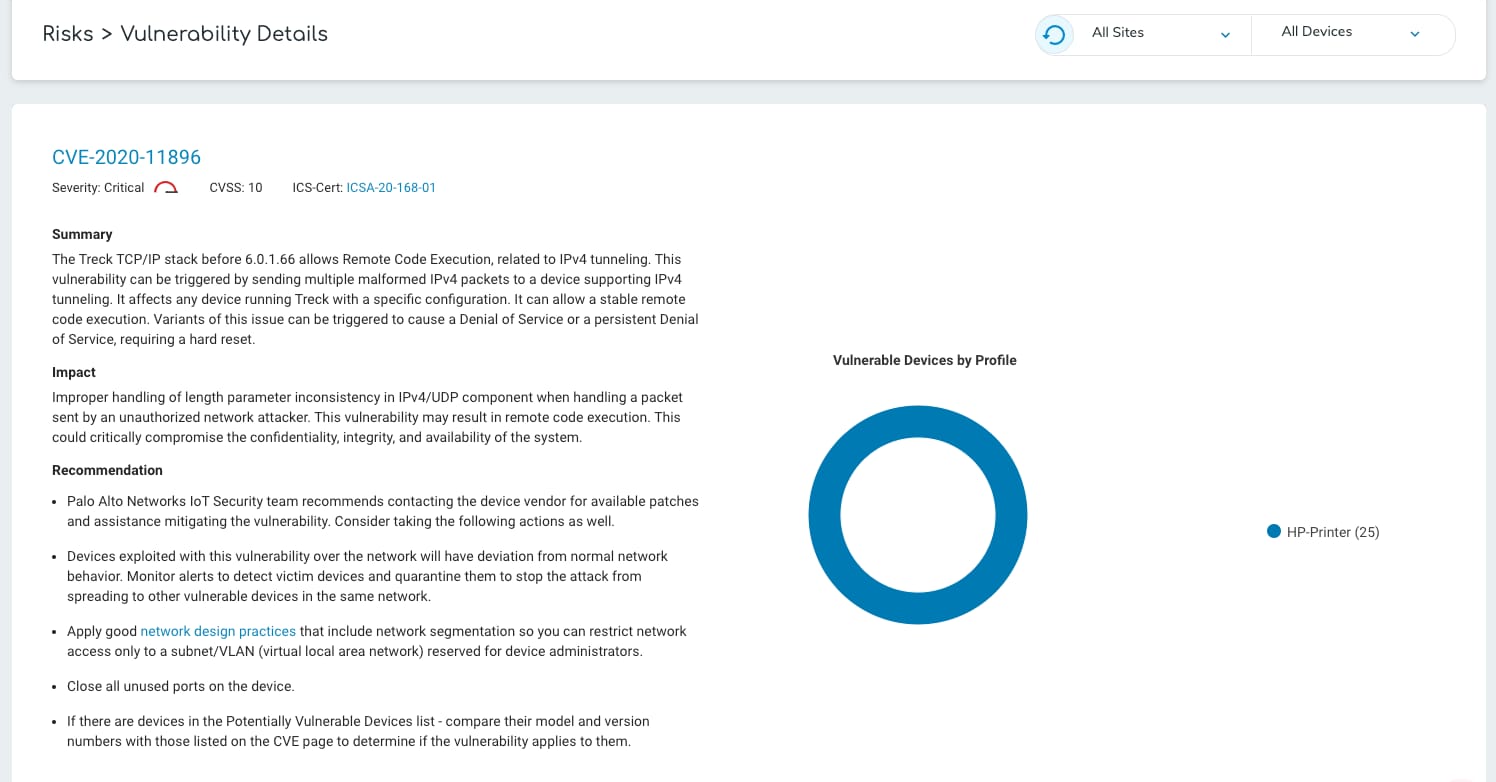 As various vendors release advisories related to devices affected in their product line, we are monitoring them and adding detections based thereon. Evaluate the impact of the vulnerability by logging in to your IoT Security service, navigating to the vulnerabilities page, and checking if any devices are vulnerable to Ripple20.

Aveek Das is a Senior Researcher in Threat Prevention. Derick Liang is a Data Scientist for IoT Security. At Palo Alto Networks, their work focuses on the security and analytics for the IoT Security Platform, mainly machine learning based threat and risk detection for IoT.