I recognize that a generic skill set is hard to quantify or measure. So, let's look at a cross functional skill that can be used not only to estimate some of those abilities, but that can also be learned and trained by anyone looking to improve their investigative and analytical process. I’m talking about visual intelligence.

One might assume it’s an inherent way of learning or a personality trait, but I assure you it is a skill that can be learned and developed to improve your analytical and communication skills through observation. Previously, I wrote about the benefits of generalists in the cybersecurity field and the perspectives they bring to the table. Visual intelligence is one of those cross-functional skills they may have to offer.

Visual, Visual-Spatial, or sometimes just Spatial Intelligence was part of a theory first introduced by American psychologist Howard Gardner in 1983. According to Wikipedia, Gardner defined it as “a human computational capacity that provides the ability or mental skill to solve spatial problems of navigation, visualization of objects from different angles and space, faces or scenes recognition, or to notice fine details.” That’s a broad definition, but I think it can best be summed up as one's ability to observe.

Amy Herman, a lawyer and art historian, developed a seminar in 2000 that used the concepts of visual intelligence to develop medical students’ observational and communication skills with patients. She later wrote the book “Visual Intelligence: Sharpen Your Perception, Change Your Life,” and in 2018, gave the TED talk “A Lesson On Looking.” Herman uses works of art to improve the observation, analysis, and communication skills of her clients. Take, for example, “A Bar at the Folies-Bergere" by Edouard Manet: 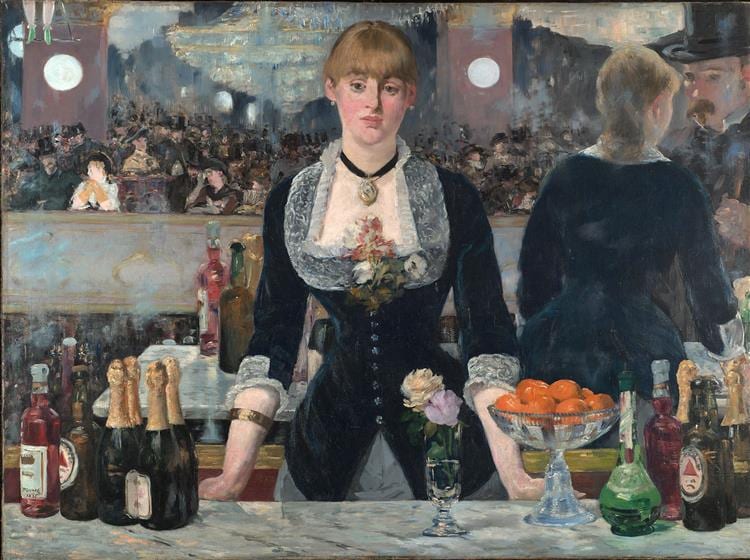 Image linked from WIkiArt: “A Bar at the Folies-Bergère” by Edouard Manet

What did you see when you looked at this image?

A woman standing behind a bar? That would be a good start, but did you also see that she is waiting on a customer? I’m sure at this point you see that she is standing in front of a mirror reflecting not only the customer and counter, but an entire crowded hall. Perhaps now you see the various styles of hats in the crowd and can deduce some theories about the time period or culture.

By observing the image, rather than just looking at it, you pick up fine details that would otherwise be missed. Practicing this skill translates into any role that requires you to consume data and make judgements about it. This is particularly helpful to cybersecurity investigators faced with the manual review of large data sets, such as log files, network traffic, raw intelligence, etc. Having a strong visual intelligence might be the difference between picking out the one entry that solves your case or noticing that one bit of information that proves your analysis correct. In addition to keeping your brain from switching to autopilot and overlooking important details, visual intelligence can also improve your communication skills. 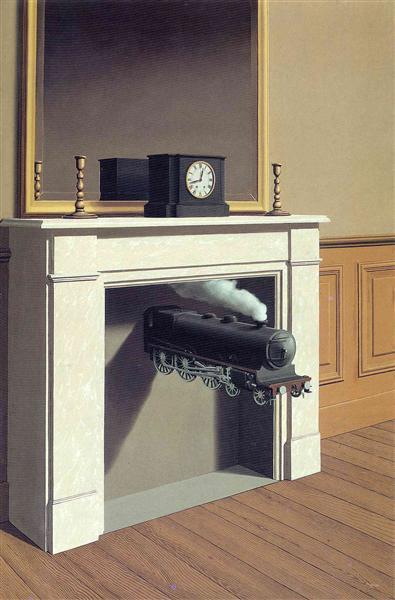 What did you see here? More importantly, how would you describe this to someone who hasn't seen the image? In this example, simply describing what you see doesn’t accurately portray the image. Your description needs to include what's missing as well. For example, there is a fireplace, but it doesn’t have any contents or fire. There is a train coming out of the fireplace, but it’s not on tracks; it’s floating. Everyone's perception is a product of their own reality. So, by thinking about how to describe what you're seeing to someone else will force you into another perspective.

This is directly applicable to many roles in the cybersecurity field where you're interfacing with or providing a product to a customer or client that isn’t as technically knowledgeable. Take a complex system or network log file, for example: which generic description would be more valuable to someone who didn’t look at the file? “We looked through the log file but didn’t find anything,” or “We looked for X in the log file that contained Y but didn’t find any instances of it?”

Whether you work in the cybersecurity field or not, if you agree with the benefits and want to improve your visual intelligence, you can do so with minimal effort. Simply taking five or ten minutes a few times a week to observe an image will produce a noticeable difference in how you see everything from the world around you, including the repetitive log files or network traffic you might be analyzing. If you’re looking to improve your communication skills as well, then consider how you would describe the image to someone so that they have an accurate idea of the source without ever seeing it. To get started, there is an endless list of coffee table books featuring the works of famous artists, but there are also online options like WikiArt and Google Arts & Culture.

The observation of works of art isn’t the only way to improve your visual intelligence. Certainly, that’s not something that everyone would find interesting or enjoyable. An intricate jigsaw puzzle with a complex image that contains lots of small details is another option. If you’re a comic book fan, you can simply slow down reading the story and take the time to observe each image. Every page is a work of art.

The list could go on, but the idea is all the same. Working to improve your visual intelligence, no matter what method works best for you, will change how you see the world and improve your objective analysis and ability to communicate. If you want to get a sense of how strong someone’s visual intelligence is, simply show them a picture and have them describe it.