What Is Network Detection and Response (NDR)?

Unlike many log management and security analytics products that focus on security alerts, NDR solutions analyze raw network traffic logs to identify threats. While they can also be deployed as a passive network element that collects data from network switch SPAN ports or physical TAPs, an increasing number of NDR solutions today can gather network traffic data from existing network infrastructure, such as network firewalls, easing deployment.

What Types of Threats Do Network Detection and Response Solutions Uncover?

The four main types of cybersecurity risks identified by NDR solutions include: 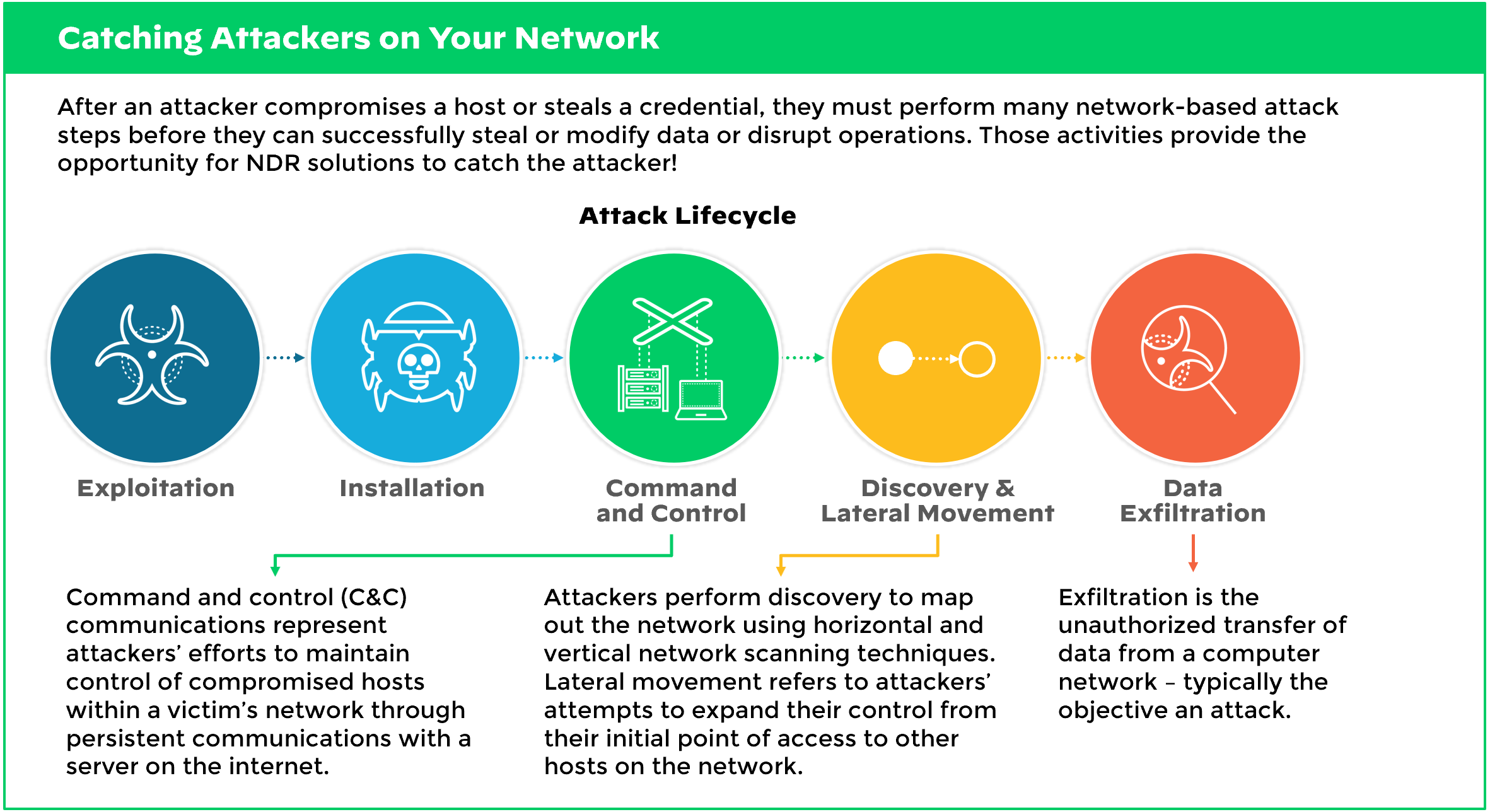 The Shortcomings of Network Detection and Response

Security teams that want to hunt down active attackers at the earliest possible stages of the attack life cycle should monitor network traffic for attacks. However, despite their benefits, NDR tools also have their limitations. They only analyze network logs and can’t monitor or track endpoint events, such as process details, registry changes or system commands. They cannot examine cloud or identity data or other valuable sources of security information. Complex attacks require analysis of multiple data sources to identify and confirm malicious activity. Siloed cybersecurity tools like NDR solutions are costly to deploy and maintain, create potential blind spots, and force security analysts to switch between consoles to gather context.

Traditional network detection and response tools focus on network data only. This narrow scope of analysis can result in missed detections, increased false positives and lengthy investigations. These weaknesses magnify the problems many security teams already face, including too many siloed tools, too many alerts and too little time.

Extended detection and response, or XDR, is a new approach to threat detection and response. XDR expands the scope of security beyond one data source, such as endpoint, network, cloud, or identity data, recognizing that it’s not effective to investigate incidents in isolated silos. XDR platforms automatically stitch together data from different sources and apply use artificial intelligence (AI) to uncover covert cyber threats. This increases visibility and productivity compared to siloed security tools. The result is simplified investigations across security operations, reducing the time it takes to identify, verify, and respond to attacks.

Cortex XDR is the industry’s first extended detection and response platform that integrates data from virtually any source to stop sophisticated attacks. Cortex XDR has been designed from the ground up to protect your whole organization holistically while simplifying operations. It delivers best-in-class next-gen antivirus (NGAV) to stop exploits, malware, ransomware, and even non-malware attacks.

Cortex XDR helps you speed investigations by providing a complete picture of each incident. It stitches different types of data together and reveals the root cause and timeline of alerts, allowing your analysts to easily triage alerts. Flexible response options let you root out attackers, contain fast-moving threats, and even restore compromised endpoints.

XDR is a new approach to threat detection and response, a key element of defending an organization’s infrastructure and data from damage and misuse.

Cortex XDR is the industry’s only detection and response platform that runs on fully integrated endpoint, network and cloud data. Explore Use Cases for Cortex XDR.

Our Dummies Guide for XDR explains what extended detection and response is and isn't. Learn why this security solution is vital for protecting the modern enterprise.