What Is Serverless Security? 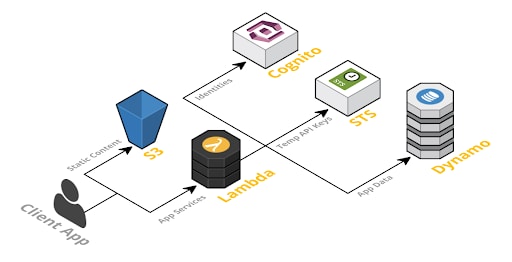 With every major advancement in software development and IT operations comes a shift in attack vectors and security risks. In the early days of virtualization to containers, security professionals had to adapt and find new ways of hardening, defending and governing their infrastructure. The concept of a serverless application presents one of the biggest paradigm shifts ever seen when it comes to application security.

Traditionally, organizations would protect their applications by relying on infrastructure and network-based tools. They would inspect traffic with a firewall, try to detect malicious activity with an intrusion detection system, or protect applications with runtime application self-protection, or RASP, technology. Even with containers, organizations could still rely on the security of the underlying infrastructure to a certain degree.

A serverless application consists of distributed cloud services working together, such as an S3 bucket which triggers a Lambda Function, which in turn triggers DynamoDB®. In this architecture, there’s no room for firewalls, IDS/IPS tools, or any kind of instrumentation agents or server-based protection methods. Instead of focusing on network inspection and access control lists, the serverless model shifts the focus of security to permissions, behavioral protection and strong code.

Adopting serverless security gives applications a strong headstart from a security perspective since organizations no longer have to worry about infrastructure, network or host security. However, new attack vectors have emerged, and familiar attacks have been reimagined for serverless environments. Let’s take a look at one example (for the full list, refer to the Cloud Security Alliance’s “Top 12 Risks for Serverless Applications”):

Injection flaws in applications, among the most common risks to date, have been thoroughly covered in many secure coding best practice guides. At a high level, injection flaws occur when untrusted input is passed directly to an interpreter before being executed or evaluated. In the context of serverless architecture, however, function event-data injections are not strictly limited to direct user input (such as input from a web API call). Most serverless architectures provide a multitude of event sources that can trigger the execution of a serverless function.

Some event source examples include:

Each event input might include different message formats, and various parts of these event messages can contain attacker-controlled or otherwise dangerous inputs. This rich set of event sources increases the potential attack surface and introduces complexities when attempting to protect serverless functions against event-data injections. This is especially true because serverless architectures are not nearly as well-understood as web environments where developers know which message parts shouldn’t be trusted (e.g., GET/POST parameters, HTTP headers, etc.). 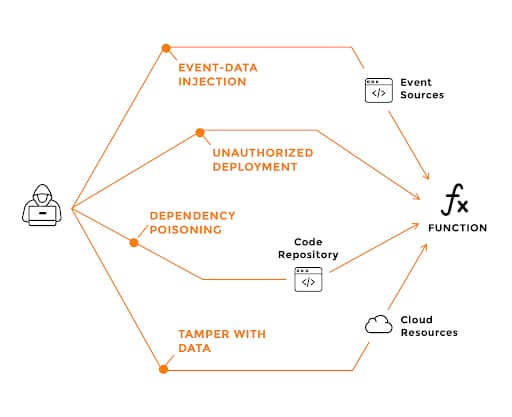