What is IoT Security?

While relatively new as a cybersecurity discipline, the Internet of Things (IoT) as a business enabler has matured into a clearly defined set of use cases solving pressing business problems that deliver operational and cost benefits across many industries, such as healthcare, retail, financial services, utilities, transportation and manufacturing.

The rapid growth of capabilities and adoption of IoT technology has fueled a transformation in enterprise operations with IoT devices making up 30% of total devices on enterprise networks today. Rich data collected from these devices provides valuable insights that inform real-time decisions and deliver accurate predictive modeling. In addition, IoT is a key enabler of digital transformation in the enterprise, with the potential to drive up workforce productivity, business efficiency and profitability as well as the overall employee experience.

Despite the many advantages and innovations IoT technology enables, the interconnectedness of smart devices presents a substantial challenge to enterprises in terms of grave security risks arising from unmonitored and unsecured devices connected to the network.

What Is an IoT device?

An IoT device is essentially any network-connected physical asset that isn't a computer. While enterprise IT teams protect standard IT devices with traditional network security technology and protocols, the security risks associated with IoT devices are less well-known, and securing IoT is an unaddressed challenge in many organizations. Standard cybersecurity systems are incapable of recognizing and identifying either the specific types of IoT devices or the unique risk profiles and expected behaviors associated with them.

In addition, IoT devices can be deployed by any business center, thereby bypassing typical network security controls and processes. All of these network-connected IoT devices – printers, cameras, sensors, lighting, HVAC, appliances, infusion pumps, handheld scanners (the list goes on and on) – are using different hardware, chipsets, operating systems and firmware that introduce vulnerabilities and risk.

What Are the Challenges of IoT Security?

IoT security can be understood as a cybersecurity strategy and protection mechanism that safeguards against the possibility of cyberattacks which specifically target physical IoT devices that are connected to the network. Without robust security, any connected IoT device is vulnerable to breach, compromise and control by a bad actor to ultimately infiltrate, steal user data and bring down systems.

The overarching challenge for security in IoT is that as large volumes of diverse IoT devices continue to connect to the network, a dramatic expansion of the attack surface is happening in parallel. Ultimately the entire network security posture is diminished to the level of integrity and protection offered to the least secure device.

Security teams are now faced with new and escalating challenges that are unique to IoT security, including:

In addition to these challenges, 98% of all IoT device traffic is unencrypted, putting personal and confidential data at severe risk.

Which IoT Devices Have the Highest Share of Security Issues? 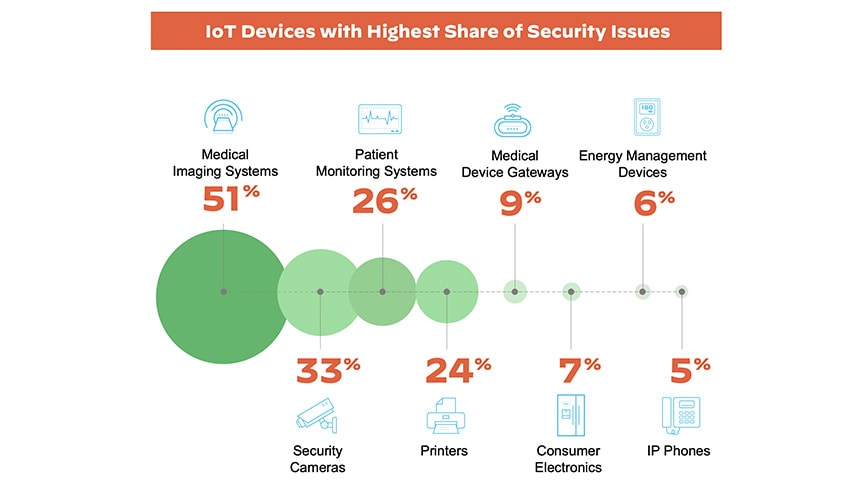 Some of the most frequent attacks on IoT devices are exploits executed using techniques such as network scanning, remote code execution, command injection and others. Forty-one percent of attacks exploit device vulnerabilities, as IT-borne attacks scan through network-connected devices in an attempt to exploit known weaknesses. After compromising the first device, lateral movement is opened up to access other vulnerable devices and compromise them one by one.

What Are the Top IoT Security Threats? 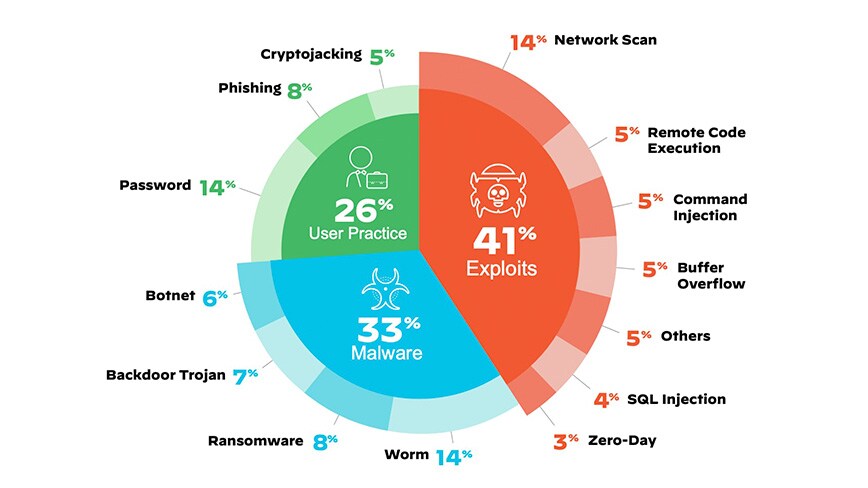 What Are the Best Practices for IoT Security? 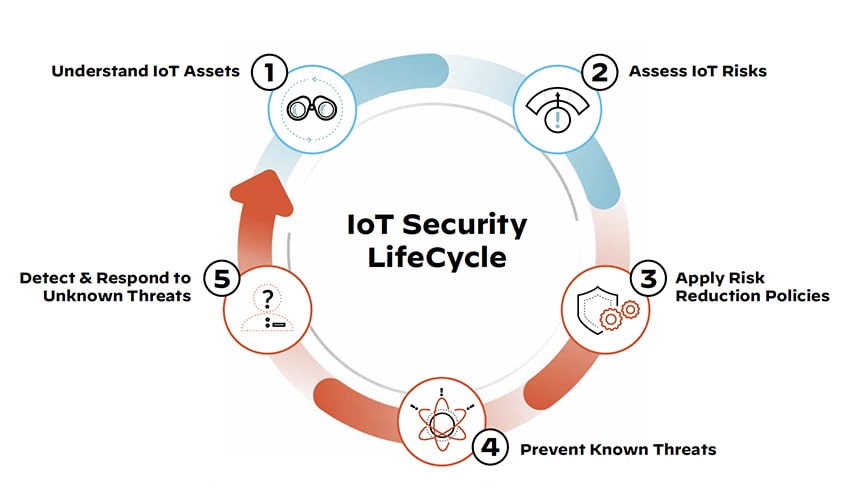 Network security and operations teams should be incorporating IoT security into standard practice, process and procedure to ensure both managed and unmanaged devices fall within the same level of visibility and control across the IoT security lifecycle:

An effective strategy for security in IoT must protect devices and the networks they are connected to from the ever-widening spectrum of IoT security risks. To learn more about IoT security best practices, read The Enterprise Buyer’s Guide to IoT Security.

How to Secure IoT Devices in the Enterprise

Know Your Infusion Pump Vulnerabilities and Secure Your Healthcare Organization

Zero Trust security must include discovering and identifying IoT devices; authenticating, defining policy, and segmenting them; and continually assessing them.

Understand the three IoT attack surfaces and their vulnerabilities, modern IoT attacks, the IoT attack lifecycle, and impact of cyberattack scenarios on devices