Microsegmentation is a security method of managing network access between workloads. With microsegmentation, administrators can manage security policies that limit traffic based on the principle of least privilege and Zero Trust. Organizations use microsegmentation to reduce the attack surface, improve breach containment and strengthen regulatory compliance.

What Is a Workload?

A workload can be broadly defined as the resources and processes needed to run an application. Hosts, virtual machines and containers are a few examples of workloads.

Perimeter security makes up a significant part of most organizations’ network security controls. Network security devices such as network firewalls inspect “north-south” (client to server) traffic that crosses the security perimeter and stop bad traffic. Assets within the perimeter are implicitly trusted, thus “east-west” (workload to workload) traffic may go without inspection. 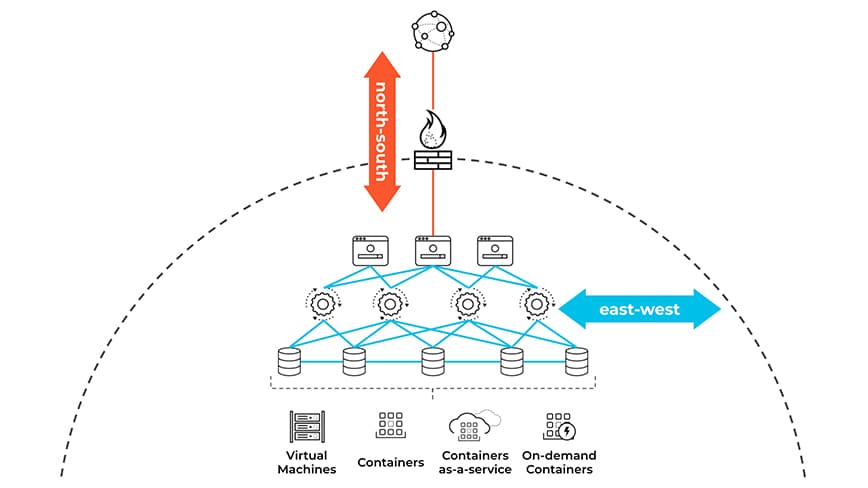 For most organizations, east-west communications make up the majority of data center and cloud traffic patterns, and perimeter-focused defenses do not have visibility into east-west traffic. Given these factors, malicious actors use this as an opportunity to move laterally across workloads.

Figure 2: Microsegmentation can help you isolate the attack.

Network segmentation is an approach that divides a network into multiple smaller segments. This comes with performance and security-related benefits: 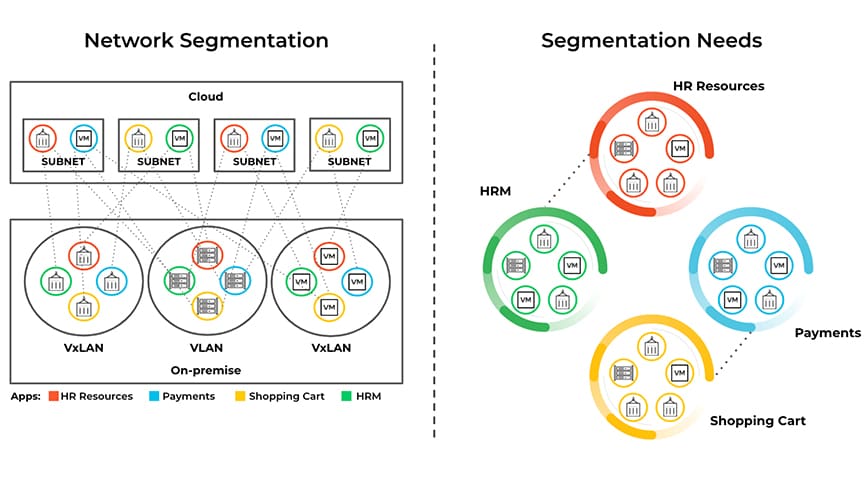 Microsegmentation, also referred to as zero trust or identity-based segmentation, delivers on segmentation requirements without the need to re-architect. Security teams can isolate workloads in a network in order to limit the effect of malicious lateral movement. Microsegmentation controls can be assimilated into three categories:

A microsegmentation solution should deliver visibility into all network traffic inside and across data centers and clouds. While there are a number of ways to monitor traffic, the most effective measure is to see traffic coupled with workload context (e.g., cloud, application, orchestrators) as opposed to logs containing only IP addresses and ports.

Granular security means network administrators can strengthen and pinpoint security by creating specific policies for critical applications. The goal is to prevent lateral movement of threats with policies that precisely control traffic in and out of specific workloads, such as weekly payroll runs or updates to human resource databases.

Microsegmentation offers protection for dynamic environments. For instance, cloud-native architectures like containers and Kubernetes can spin up and down in a matter of seconds. The IP addresses assigned to cloud workloads are ephemeral, rendering IP-based rule management impossible. With microsegmentation, security policies are expressed in terms of identities or attributes (env=prod, app=hrm, etc.) rather than network constructs (e.g., 10.100.0.10 tcp/80). Changes to the application or infrastructure trigger automatic revisions to security policies in real time, requiring no human intervention.

The range of use cases for microsegmentation is vast and growing. Here are some representative examples:

Learn about microsegmentation solutions for your organization.

When organizations move applications to the cloud to solve security problems, they actually add more layers of network complexity, increasing the time, effort and cost to maintain ...

Cloud workload security vendors are ranked in this report by Forrester.